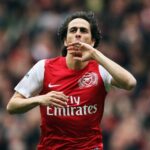 Recognized as one of the Premier League’s giants, Arsenal has been home to some of the greatest players ever seen in England’s top flight.

Names like Thierry Henry, Robin van Persie, and Mesut Ozil are just some of the greats to have played for Arsenal. But many other big names have played for the Gunners and been forgotten since.

While these players saw success elsewhere in their careers, their time at Arsenal was either a failure or forgettable for other reasons.

Here are five players you never knew played for Arsenal.

A genuine journeyman of football who played for no fewer than 15 clubs during his career, it’s easy to forget that Jermaine Pennant was once an Arsenal player.

In fact, the winger was signed by the Gunners from Notts County at the age of 15, for a fee of £2m.

That fee was a record for a trainee at the time and meant that Pennant was supposed to go on to achieve big things in North London.

Unfortunately, it never really panned out for him. Pennant made his Arsenal debut at the age of 16, becoming their youngest-ever player at that point.

But after scoring a hat-trick on his full league debut, it became clear that the winger’s mentality didn’t quite match his talents.

Arsenal boss Arsene Wenger never fully trusted him, and he ended up making just 12 Premier League appearances for the Gunners.

Pennant moved to Birmingham City, initially on loan in the 2004-05 season. And after a conviction for drink-driving, he made the move permanent.

Later in his career, Pennant wound up at Liverpool – and even started for the Reds in the 2007 Champions League final.

However, overall, his career was one of wasted potential, and he’s largely been forgotten by Arsenal fans now.

A French international who won the Ligue 1 title with Lille in 2010-11, Mathieu Debuchy spent four seasons with Arsenal.

However, it’d be very easy to forget the full-back’s tenure at the Emirates, largely because he only played a handful of games for them – 13 in the league to exact.

Debuchy’s career in the Premier League actually started with Newcastle United. He moved there in January 2013 after 10 seasons with Lille and performed impressively for the Magpies for a season and half.

His performances at St. James’ Park were enough to persuade Arsenal to part with £12m for him, and the Frenchman was even given the #2 shirt upon his arrival.

However, Debuchy only made 10 Premier League appearances for the Gunners in his debut season. His failure to establish himself in their first team was largely down to a mix of injuries and the emergence of Hector Bellerin.

Debuchy continued to struggle for playing time in the 2015-16 season and then moved to Bordeaux on loan for the second half of the campaign.

That move didn’t pan out either, and he made just nine appearances before returning to the Emirates.

However, despite spending another full season at Arsenal, he played just eight more times for the Gunners before finally moving to Saint-Etienne in January 2018.

Considering his reputation as a high-level French international, to say Debuchy’s time at Arsenal was disappointing would be an understatement.