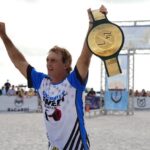 WWE shared the news on its Twitter page. The title change took place during the halftime of the 2021 Celebrity Flag Football Game, which R-Truth also happened to be attending.

According to the WWE 24/7 Championship rules, the champion has to defend the title at all times. It can be challenged for anywhere at anytime, as long as the challenger, the champion and the referee are present. During halftime, R-Truth was speaking on a microphone when a referee appeared. WWE fans could probably have predicted what happened next.

It wasn’t long before the Heisman Trophy-winning NFL Quarterback crept behind R-Truth and rolled him up long enough to keep him down for the three count. But Flutie’s reign was short-lived. Later in the game, R-Truth regained the title in a similar manner. He rolled Flutie up and pinned his shoulders to the ground.

Doug Flutie isn’t the first celebrity to win the 24/7 Championship. Kyle Busch, Marshmello and Rob Gronkowski are some of the big names who have held the title in the past.

The concept of the 24/7 Championship is arguably the wildest in all of WWE. Many records have been broken by this title alone, and it changes hands almost every week.

Since its introduction in 2019, there have been over a hundred reigns in the short history of this title. The current champion, R-Truth has won the title 49 times, as he added Doug Flutie to the list of champions that he has pinned to win the title.

The title has changed hands in a number of unusual places. From an airport tarmac to the set of a television show, the WWE 24/7 Championship has travelled all over the place.

There are no bounds as to where competitors can battle over the WWE 24/7 Championship can be contested for. That’s what makes the title so entertaining, and the nature of R-Truth’s latest win supports that idea.