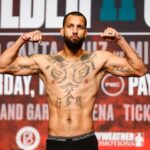 Dustin Long has been given a clean bill of health following the scariest moment of his combat sports career.

The 38-year-old boxer has made his way home to Johnson City, Tennessee upon being discharged from the hospital after a frightening knockout loss to Tristan Kalkreuth. Long was knocked out cold at 1:18 of round one in their DAZN-streamed fight this past Saturday at Dickies Arena in Fort Worth, Texas, with ringside paramedics carrying him out of the ring and the arena floor on a gurney.

From there, Long was taken to a nearby hospital where he was treated for dehydration and held for observation before being released later that evening.

“Dustin is fine,” Nate Torres, Long’s manager confirmed to BoxingScene.com on Monday. Flew out to Tennessee Sunday [after he] was released Saturday night after the fight. They put an IV on him, checked him out and sent him home.”

Long—who has competed both as a boxer and mixed martial artist, while having trained for bare knuckle fighting—was riding a four-fight win streak heading into his showdown with Kalkreuth (8-0, 6KOs), a fast-rising 19-year-old prospect from nearby Duncanville, Texas. The most notable accomplishment by the East Tennessee native was his November 2019 knockout win over Marsellos Wilder, the younger brother of Deontay Wilder who made his final successful heavyweight title defense in the main event with a repeat knockout win over Luis Ortiz.

For Long, it was the last fight more than a year before returning to the ring this past February in a 1st round knockout of Billy Combs on a club show in middle Tennessee. From there, came the call to face Kalkreuth on a DAZN show headlined by an all-Dallas showdown between unbeaten welterweight contender Vergil Ortiz Jr. (17-0, 17KOs) and former junior welterweight titlist Maurice Hooker (27-2-3, 18KOs).

The night turned out to be a breakout party for Kalkreuth, a promising young talent on the rise who is promoted by Golden Boy Promotions and trained by Ronnie Shields. Long hoped to upset the apple cart but found himself outgunned from the opening bell—and perhaps even prior to that point.

“He was severely dehydrated and his body did not rehydrate properly prior to the bout,” admits Torres. “The first shot to the head [threw] off his equilibrium and he was done.”

Long (4-2-2, 3KOs) was eventually given a clean bill of health and permitted to travel back home on Sunday. The plan is to remain in the sport, though no longer as a participating athlete. That part will be left to the evening’s winner.

“We take the good with the bad,” notes Torres. “Dustin will be fine and has had a great career (in combat sports). The people of Johnson City, Tennessee, his team and family are super proud of him and his accomplishments.

“Make no mistake, we came to win but Tristan did his thing and was a better man Saturday night. We wish him much success with his career and it was an honor to share the ring with him and his team.”