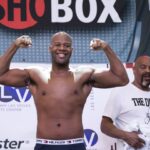 In the end, Trevor Bryan got everything he wanted—chief among them, a long-awaited return to the ring.

Bryan floored Stiverne twice, with the fight stopped by referee Frank Gentile shortly after the second knockdown at 1:26 of round eleven. With the win, Bryan upgrades his interim title reign and now moves one step closer to chasing the big guns of the division.

“I want all the top guys,” Bryan told BoxingScene.com. “Anthony Joshua, Tyson Fury. They are on my radar and I want to stay active until I get them.”

The belt was made available following a ruling made by the WBA on Friday afternoon, downgrading Mahmoud (Manuel) Charr (31-4, 17KOs) for failure to defend his title in a timely fashion. Charr has not fought since winning the belt in a 12-round decision over Alexander Ustinov in Nov. 2017, the inactive period extended after issues with event promoter Don King in securing a P1 travel visa in order to fly from Cologne, Germany to be able to fight in the United States.

Bryan controlled the action in the opening round, poking his jab through Stiverne’s guard and also working the body. Stiverne—who stepped in for an unavailable Charr—didn’t show any fear of the incoming but didn’t let his hands go to the point of preventing Bryan to shut down his offense.

Stiverne landed his first significant shot of the right early in round two, connecting with an overhand right. Bryan was affected by the shot, as Stiverne was able to follow with a straight right hand which buzzed his undefeated foe. Bryan bounced back, connecting with a one-two and finding his desired distance in the final minute of the round. Stiverne managed to cut off the ring but Bryan quickly adjusted and connected with a right uppercut.

Bryan engaged in a dedicated body attack in round three, throwing looping rights and left hooks downstairs. Stiverne was unfazed by the approach, constantly moving side to side while looking for the best angle through his overhand right.

Both boxers had their say in round four. Bryan initiated most of the action, though struggling to pin down the craftier Stiverne, who connected late with a right hand and left hook. Bryan took the shots well, continuing to work behind his jab but failing to seize sustained momentum.

Stiverne continued to look for ways to set traps in round five. Bryan was the busier of the two in terms of punch output but Stiverne effectively used every inch of the ring without getting on his bicycle. The jab continued to be key for Bryan, though having to remain wary of Stiverne’s overhand right.

The second half opened with little separation between the two. Stiverne continued to go through his bag of tricks while Bryan pumped his left in hopes of creating an opening for a right hand to follow.

Stiverne once again commanded the attention of Bryan courtesy of an overhand right midway through round eight. It awoke a sleeping giant, as Bryan responded with right hands of his own.

Bryan untracked his offense in round nine, connecting downstairs as Stiverne’s already low punch output further decreased. Stiverne made it count when he chose to let his hands, once again connecting with an overhand right. Bryan didn’t allow the shot to steal the round, scoring with an uppercut, right hand combination and having a response anytime Stiverne attempted to take the lead.

The jab was key for Bryan in round ten, while fatigue slowly began to set in for Stiverne. Action slowed as a result, save for a right hand from Stiverne over the top of Bryan’s guard in the final ten seconds.

Bryan closed the show in round eleven. A series of right hands sent Stiverne to the canvas for the first time in the fight. The former titlist from Las Vegas by way of Haiti made it to his feet but was back on the deck barely a minute into the round after getting clipped with a right hand in the corner. He was given every chance to fight back after once again beating the count but an ensuing volley by Bryan forced the stoppage.

The goal for Bryan is to remain far more active in 2021, although his hope of landing a superfight with WBA “Super” champion Anthony Joshua (24-1, 22KOs; also IBF/WBO/IBO champ) remains out of reach for the time being.

England’s Joshua is on course to next face countryman and Lineal/WBC champion Tyson Fury (30-0-1, 21KOs). As it stands, WBO number-one contender Oleksandr Usyk (18-0, 13KOs) is the next mandatory challenger in the rotation, although he has been ordered to enter an interim title fight with England’s Joe Joyce to allow Fury and Joshua to first meet.

Whatever comes of Bryan’s immediate future, anything other than years of inactivity will be welcomed.

“I know this ain’t the old days where we can fight every 2-3 months,” Bryan told BoxingScene.com. “But I certainly want to fight more than once every 2-3 years.

“This fight was to show everyone that I’m back!”

The bout topped a three-fight telecast which aired live on a Don King-distributed Pay-Per-View show. 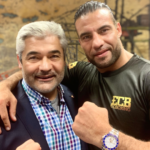 As previously reported by BoxingScene.com, Manuel Charr still awaits a travel visa for a planned secondary WBA heavyweight title defense versus Trevor Bryan. The bout is tentatively scheduled to take place January 29th, which just so happens to be the deadline imposed by the sanctioning body in order for King to retain promotional rights to the fight.

The Florida State Boxing Commission previously confirmed that a request has been submitted to promote an event at the Seminole Hard Rock Hotel & Casino in Hollywood, Florida. A request has been placed for the bout to carry random drug testing through Voluntary Anti-Doping Agency, a mandated requirement per a WBA ruling from the previous purse bid hearing last March. However, the event has yet to evolve beyond paperwork submitted, with the clock ticking and things not looking good for the Hall of Fame promoter who has fallen back into old habits.

“We are hearing rumors that the fight is not booked,” Erol Ceylan, Charr’s promoter told BoxingScene.com. “Hard Rock Hotel has no reservation for that date for an event without an audience. [Unbeaten heavyweight Christopher] Lovejoy [claims to] not know that he’s fighting [former heavyweight titlist Bermane] Stiverne.

“We take this fight very serious and try to make sure everything is done professionally in order for us to fight in [the greater Miami area]. I never do business the way they are doing things because nothing looks serious.”

Charr (31-4, 17KOs) has not fought since Nov. 2017, when the Germany-based Syrian heavyweight outboxed Alexander Ustinov to win his secondary WBA heavyweight title. The extended title reign has yet to include a successful title defense, though complete with plenty of delays and scandals. Charr tested positive for two separate banned substances surrounding an eventually canceled Sept. 2018 title fight with Fres Oquendo, the infraction for which he initially stripped of his title in November 2018.

A testing loophole involving the opening of his “B” sample allowed for the restoration of Charr’s title reign, though on the condition that he submit to mandatory random drug testing. Soon thereafter came plans to defend versus Bryan (20-0, 14KOs), who has not fought since a knockout win over BJ Flores to win the interim WBA title in Aug. 2018.

King won a purse bid hearing last March, submitting $2,000,000 to claim promotional rights to a bout he initially planned—on paper, anyway—to stage last May. The initial wave of the ongoing coronavirus shut down those plans, with the WBA providing leeway to a point before establishing an absolute deadline for the bout to take place by no later than Jan. 29, 2021 before taking matters into its own hands.

From there came a last-minute scramble to secure a date with the Florida commission, although every other aspect of the card remains in limbo—par for the course for any Don King Productions-branded event for at least the past ten years. Christopher Lovejoy missed out on a chance to face fellow fringe heavyweight Dave Allen last November due to remaining under contract with King, with event promoter Eddie Hearn immediately pulling the plug on the fight once made aware of the development.

Lovejoy has since taken to social media to trash King at every turn, including his learning through social media of the alleged fight with Stiverne. The same approach has since been adopted the planned headliner.

“What a mean, nasty game by Don King,” Charr stated on his verified Instagram account on Sunday. “[Bryan] don’t want to fight me. Don King tries to force me to sign with him, which I definitely won’t do! I have a boxing promoter myself: Erol Ceylan. We have already put our lawyers on all points. Don King won’t get away like this! No matter what happens: I’m 200% fit and ready to fight. The title stays with us in Germany. I filled out all of the WBA’s forms, adhered to the legal guidelines and signed all of the WBA’s contracts several times.

“I also signed the DKP contract under protest! The game with Don King has been going on for two years. We boxers are neither promoters nor organizers. I would like to defend my title every three months! It’s all up to Don King that I haven’t been able to fight for two years. Allah is the greatest he will give me the power and passion!! I will be ready for you and every challenge.”

Charr remains in Germany without a returned signed contract or any indication of a travel visa in place to bring him abroad. King has yet to submit deposits to secure the venue or drug testing, with the alleged event now less than three weeks away.

Even with the fight freeing up should King once again default, it still means further delays in the careers of at least two fighters if not everyone reportedly due to fight on the card. Among those stuck in the holding pattern are inactive cruiserweight titlist Beibut Shumenov (18-2, 12KOs) and scheduled challenger Raphael Murphy (14-1, 11KOs). Shumenov has not fought since claiming the WBA title in a 9th round knockout of Hizni Altunkaya in July 2018.

Charr remains the bearer of the longest inactive streak of anyone on the alleged show, though he and his team are prepared to take matters into their own hands.

“I await from partner to give us information that we can promote also the event. We don’t know the broadcaster, we cannot help to sell tv rights [in Germany],” notes Ceylan. “Also, which gloves will be used by us and by Bryan? So many things have to be organized to be sure that the fight happens.

“That is very unprofessional from Don King . I think WBA will notice this and must follow the rules to make the right decision.”