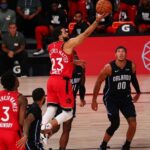 The Orlando Magic will take on the Toronto Raptors tonight in a clash between two Eastern Conference playoff hopefuls. The game will take place at the Amalie Arena in Tampa Bay, which is the Raptors’ home court for this season. The Magic have a 8-12 record, while the Raptors have massively underperformed which has led to them having a dismal 7-12 record.

The Orlando Magic have lost 12 of their last 16 games after starting the season 4-0. Markelle Fultz played a huge part in the Magic’s early success and the team has felt his absence since he was ruled out for the campaign with a torn ACL.

Steve Clifford’s men have slipped to the 11th spot in the East, which is a far cry from thier ambition to secure a playoff berth. The Magic have been in terrible form lately, and securing a win against a vulnerable Raptors side might help them get back to winning ways.

Nikola Vucevic has been among the few bright spots for the Orlando Magic this season. He’s averaging 23.0 points per game on 44.6% shooting from downtown, both career-highs. Vucevic’s also managing a solid 10.7 rebounds per game and will have to establish his authority inside the paint against the Toronto Raptors if the Magic want to stand a chance at winning this fixture.

Also Read:1 player the Dallas Mavericks could acquire before the NBA trade deadline to make a title push

The Toronto Raptors have struggled to find their offensive rhythm this season, resulting in them being stuck in the bottom half of the Eastern Conference. The lack of a leading scorer has hurt the 2019 champions massively, as Fred VanVleet and Pascal Siakam have been unable to shoulder the responsibility of being a primary scorer.

The Raptors are currently on a three-game winning streak, which they would like to continue when they host the Orlando Magic at Amalie Arena.

It is a testament to how poor the Toronto Raptors have been this season that an underperforming Pascal Siakam has been their best player.

However, he has been quite poor in the deciding minutes of games – something he will need to improve when the Raptors have a showdown tomorrow with the Magic.

Taking into their recent performances into account, it is difficult to forecast a winner in the Orlando Magic-Toronto Raptors matchup. However, the Raptors have more star presence in their starting lineup, which might tilt the contest in their favor.

Where to Watch Magic vs Raptors

The Orlando Magic-Toronto Raptors game will be telecasted locally on Fox Sports Florida and SN Network. You can also live stream the same via the NBA League Pass. 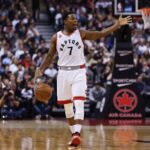 The NBA 2020-21 regular season tipped off on 22nd December and the entire schedule can be viewed here.

The San Antonio Spurs had failed to qualify for the NBA Playoffs last time around, which ended up breaking a 22-year streak. This time around, they will be hoping their aging stars will stay healthy and be able to guide them to another playoffs berth.

Meanwhile, the Toronto Raptors had a quiet offseason but will be confident about making a serious run for the NBA Championship. The Raptors have multiple young stars and impressive depth in their roster but lost their first game after a lackluster performance where they looked weary on both ends of the court.

For the San Antonio Spurs, Dejounte Murray will be looking to negate some of the offensive threat that the Toronto Raptors pose, while DeMar DeRozan has a chance to continue his prolific scoring form. Finally, LaMarcus Aldridge will be looking to have a good offensive game as Fred VanVleet looks to put behind a poor game against the New Orleans Pelicans.

In the matchup that might as well decide the fate of the match, Fred VanVleet will be looking to shrug off a poor display in the Toronto Raptors’ opening day loss against the New Orleans Pelicans. Aldridge on the other hand registered a cool 20 points in the San Antonio Spurs’ victory over the Grizzlies.

How the two do in their respective positions will have an impact in both the offensive and defensive ends during the matchup. An aging Aldridge is coming up against a mercurial all-round shooting-guard who will want to shrug off the first game and help his team to victory against an experienced San Antonio Spurs side.

On one hand is DeMar DeRozan, who at the age of 31 is still going strong as one of the NBA’s most lethal scorers. Moreover, he looks to have started the season in tremendous form, and registered 28 points, 9 assists and 9 rebounds in the San Antonio Spurs’ victory over the Memphis Grizzlies.

Pascal Siakam, on the other hand, has emerged as one of the most improved players in the NBA over the previous few seasons. During the NBA 2019-20 regular season, Pascal Siakam registered career-high numbers in multiple fields, with 22.9 points, 0.9 blocks, 1 steal and 3.5 assists per game.

Regardless, this matchup may go the San Antonio Spurs’ way, as DeMar DeRozan continues his scoring form.

Kyle Lowry is considered one of the best point guards in the NBA, and for quite a few reasons. He is brilliant on both ends of the field, has brilliant vision, and is one of the most consistent players around. The Toronto Raptors have had huge success with Kyle Lowry as their ball-playing point guard, and he will be looking forward to going up against Dejounte Murray.

Murray is the youngest-ever player to make it to the NBA All-Defensive team. He is coming off the back of an impressive all-round performance during the San Antonio Spurs’ first game against the Memphis Grizzlies. Despite his defensive prowess, Murray will have his hands full and will be looking to negate Lowry’s all-round offensive threat.