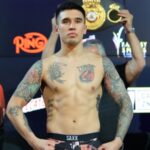 On Saturday April 17, Eye of the Tiger Management will present a boxing card available exclusively on Punching Grace, before the fights of David Lemieux and Simon Kean on TVA Sports.

Local fans remember the first clash between Germain and Claggett, which ended in a controversial draw at the Casino de Montréal on January 26, 2019. However, these two pugilists are now both fighting under the aegis of EOTTM and eagerly want to get back into the ring together to leave no doubt as to the outcome.

“The first bout between Germain and Claggett created a lot of excitement in addition to being the fight of the year in Canada in 2019. On April 17, we will be offering a card of incomparable quality for all our subscribers since four fights could have equally been the main event. The second clash between these two warriors will dramatically conclude our boxing evening on Punching Grace before the fights of Lemieux and Kean which will be broadcast on TVA Sports,” stated the president of Eye of the Tiger Management, Camille Estephan.

“Although we have a lot of renowned boxers within our team, it is important for us to always continue our research to try to find the best boxers available. On this card, we will also introduce fans to new talents that we have just welcomed to the team. These young boxers have all the potential to have great careers among professionals,” said EOTTM General Manager Antonin Décarie.