Jamel Herring is now pressed with his most difficult choice to make on the heels of securing the biggest win of his career.

A rousing 6th round knockout of former two-division champion Carl Frampton extended Herring’s WBO junior lightweight title reign. The question is for how much longer, though nothing to do with his in-ring ability. The 35-year-old southpaw will now have 30 days to determine—in writing—his commitment to next honor his overdue mandatory title defense or else vacate the belt.

Former featherweight titlist Shakur Stevenson (15-0, 8KOs) is the current WBO junior lightweight mandatory challenger in waiting, with the sanctioning body conditionally granting permission for Herring to enter Saturday’s title defense versus Frampton (28-3, 16KOs). In an agreement dated on March 23 and submitted to Hall of Fame promoters Bob Arum (Herring) and Frank Warren (Frampton)—a copy of which has been obtained by BoxingScene.com—the WBO called for the winner of Herring-Frampton to next commit to facing the winner of an ordered interim title fight between Stevenson and Jeremiah Nakathila to avoid being stripped of the title.

A location has not been revealed for the bout between Stevenson and Nakathila, which has yet to be formally announced.

Stevenson accepted the fight in lieu of having Herring stripped for failure to honor his mandatory commitment. Legal representatives for the former WBO featherweight titleholder sought to do just that earlier this year. Herring was previously ordered to have completed his previously approved voluntary defense versus Frampton no later than December 31, 2020. The pandemic caused several delays, including the cancelation of their planned clash last June in Belfast.

The WBO noted the ongoing global health crisis as means to permit Herring an extended deadline to complete the contractually agreed upon fight with Frampton. However, the sanctioning body will not allow another exception to be filed.

Herring is officially on the clock, having previously acknowledged the due title defense versus Stevenson. However, a two-belt unification with WBC titlist Oscar Valdez (30-0, 23KOs) is the fight he most craves before moving up to lightweight.

Unfortunately, he cannot have his cake and eat it too.

“If the winner of Herring/Frampton does not declare in writing within 30 days after their bout their intention to fight the winner of Stevenson/Nakathila, the WBO Jr. Lightweight Championship [t]itle shall be declared Vacant,” noted the sanctioning body. “The Stevenson/Nakathila bout shall be sanctioned for the WBO Jr. Lightweight World Championship.” 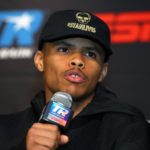 LAS VEGAS – Shakur Stevenson couldn’t have been more pleased both with his view from ringside and the outcome in the junior lightweight title fight which had his undivided attention.

“It was a beautiful performance,” Stevenson told BoxingScene.com. “I felt like he did what he was supposed to do. He outboxed him, then beat him up.

“He surprised me, he put on a masterclass performance.”

The win opens up things in the junior lightweight division, whose titles have remained splintered for more than 15 years. That part might not change anytime soon, although there exists the opportunity to deliver marquee matchups. Newark’s Stevenson (15-0, 8KOs) abandoned his WBO featherweight title reign with the intention of competing for the sanctioning body’s 130-pound title by his next fight. It would require his having to wait out the oft-delayed matchup between defending WBO junior lightweight titlist Jamel Herring (22-2, 10KOs) and former two-division champ Carl Frampton (28-2, 16KOs), which was once again postponed by at least one month.

Meanwhile, Stevenson is also the number-one contender to the WBC title recently claimed by Valdez, leaving the two in a familiar situation. Stevenson was the mandatory challenger for the WBO featherweight belt which Valdez vacated after three years in the summer of 2019. Stevenson claimed the belt with a 12-round shutout of unbeaten Joet Gonazalez in Oct. 2019, though giving up the belt last summer without a single title defense as he quickly outgrew the division.

Two wins have since followed for Stevenson—a 6th round knockout of Felix Caraballo last June and a 10-round shutout of Toka Kahn Clary last December, both at this very venue. With the 23-year old once again aligned with a title currently owned by Valdez, it seems destined for the pair to finally collide.

“Valdez-Shakur is a huge… a monster fight,” Hall of Fame promoter Bob Arum told BoxingScene.com. “As soon as the fight was over, Shakur raced over to me and said, “That’s who I want next!” So, we will talk to both (of their teams) and figure out a way to make this terrific championship fight.”

It’s unclear whether a similar discussion takes place had Berchelt prevailed. The 29-year old from Cancun was open in his recent struggles to squeeze down to 130, having replenished all the way to 146.2 pounds by fight night. Given that, Valdez coming out on top perhaps plays better for the division in the long run.

“Definitely, yeah,” agrees Stevenson, who plans to return in May. “He’s the bigger name. I’ve been waiting for this fight for the longest. Now it’s time to deliver this fight. If not this time, my next one needs to be with Valdez for the title.” 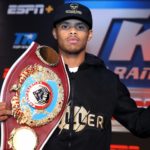 Shakur Stevenson is quickly shaping up to be The Matrix of boxing, mastering the art and mantra of “hit and don’t get hit.”

Kahn Clary landed just a meager 9% of his total punches, and so far through his three-year career, Stevenson has connected with 1,249 punches on his opponents and been caught with 351.

“[Kahn Clary] ran and held on for his life,” Stevenson said on Twitter in a series of tweets following the fight. “These boxers and real boxing fans know what they are watching, Skillfully I’m on another planet dude. I’m going to say it since nobody else is … not too many special fighters out there. I promise I’m one of them … Give me the big names next please so I can show y’all that it’s no different. I love and live this sport. My focus is insane. I am the future of boxing.”

One of the biggest possible names out there for the 2016 Olympics silver medalist Stevenson is Vasiliy Lomachenko, who’s planning to step back down from the lightweight division following his upset loss to Teofimo Lopez earlier in the autumn.

“I feel like if me and Lomachenko fight, I think I’d beat him worse than Teofimo. And not saying anything against Teofimo, he put in a dominant performance. I just feel like I’d win every round. It’d be hard for him to win any rounds,” Stevenson told Brian Campbell on the CBS Sports show “Morning Kombat.”

“It made me more motivated than anything. I’m actually a friend of Teofimo and I was proud of him. He dared to be great at such a young age, and that kind of motivated me and made me want to do more. I’m ready to get in big fights and show the world I can do what he just did.”

The former WBO featherweight champion Stevenson just stepped up to a new division — the fight against Kahn Clary was only his second fight at 130 pounds this year. The Newark native is already eyeing his next few foes in the weight class.

Stevenson is the mandatory challenger for the winner between current WBO super featherweight champion Jamel Herring and Carl Frampton.

He also wants to take on 130-pound WBC champion Miguel Berchelt, but Berchelt is next slated to face Oscar Valdez. All four of the aforementioned fighters — including Lomachenko — are signed under the Top Rank banner. Stevenson should have exceptional options in the pool for matchmakers Bruce Trampler and Brad Goodman to choose from for potential fights in 2021.

“I wish I was at 135, that’s where all the smoke is at, and I wish I was there with some of the other young fighters, but 130 is my weight class. I’ve gotta take over the 130 weight class, and there’s definitely some big names there, too.”