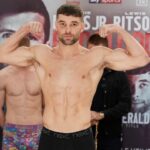 Scott Fitzgerald will finally return to the ring next month.

The undefeated former British super-welterweight champion has been out since October 2019.

‘Fitzy’, from Preston, has a ring record of 14-0 with nine quick and won an unanimous decision against Ted Cheeseman at the Utilita Arena in Newcastle to claim the Lonsdale belt.

But a barrage of out-of-the-ring issues have meant that the 29-year-old hasn’t seen action since.

That, however, is about to change after it was revealed by Eddie Hearn, the promoter of the Commonwealth Games gold medallist, that his hiatus will be up next month.

Hearn told iFL TV recently that Fitzgerald will be back under the lights on April 10, exclusively live on Sky Sports and DAZN. His appearance will come as part of the supporting cast to Conor Benn’s WBA Continental welterweight title defense against former Amir Khan opponent Samuel Vargas.

The show as a whole has yet to be assigned a venue, though Hearn stated that it will take place in London but won’t at the SSE Arena in Wembley.

Rachel Ball will meet Shannon Courtenay in a rematch as they battle it out for the vacant female WBA bantamweight title, while Savannah Marshall will makes the first defense of the WBO world female middleweight title she won against Hannah Rankin and once-defeated former British bantamweight champion Kash Farooq sees action once more alongside

In other news, Anthony Fowler has been given another fight date after being forced out of his last outing due to COVID-19.

The Liverpudlian had been set to meet Jorge Fortea last month, on the undercard of David Avanesyan’s successful European welterweight title defence against Josh Kelly, before contracting the virus.

But his promoter Hearn has added him to the supporting cast of Lawrence Okolie’s vacant WBO cruiserweight world title clash against Krzysztof Glowacki on March 20 after Chantelle Cameron pulled out of her slot on the show following an injury.

The plan for Fowler, it seems, is to fight and beat Fortea and then potentially have another runout before rematching the aforementioned Fitzgerald who was victorious when the pair met in Fowler’s home city two years ago.