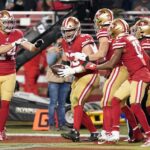 Interior offensive linemen are some of the most under-noticed, yet incredibly valuable players in football. And the San Francisco 49ers may hone in on that position in the NFL Draft.

The 49ers have nearly 40 players slated for free agency, including guards Ben Garland and Tom Compton and centers Tony Bergstrom and Hroniss Grasu.

With the likelihood of re-signing each of those players small, San Francisco will need to beef up its interior offensive line, perhaps through the upcoming NFL Draft.

Here are three interior offensive linemen the 49ers should consider selecting in the NFL Draft:

A 6-foot-4, 313-pound guard, Davis was a sensational lineman for the Buckeyes.

His accolades include First-Team All-American and First-Team All-Big Ten honors, plus a spot on the Big Ten Network’s Second-Team All-Decade squad, despite dealing with injury. He was also the 2020 Big Ten Offensive Lineman of the Year.

Davis’ shorter, stouter frame is perfect for a guard, and he’s an imposing figure for defensive linemen, whether in pass protection or pulling to block.

Incredibly similar to Davis in size, Vera-Tucker is a 6-foot-4, 315-pound guard.

The 2020 Morris Trophy winner Vera-Tucker is a highly-regarded prospect who quickly carved out a name for himself on the West Coast. He was also named First-Team All-Pac-12.

Like Davis, Tucker employs the ideal size and frame for a guard, and his history of performing well against stout competition will look good to NFL scouts and coaches.

Smith is one of the most versatile offensive linemen in this draft class.

At 6-foot-6 and 330 pounds, he has the size to play anywhere on the line, giving the 49ers quality depth should they select him in the NFL Draft. A top recruit in high school, he not only showed solid play, but also maturity and leadership while with the Vols.

The only knock against Smith is his health, as he struggled with blood-clot issues during his college career. But if he can stay on the field, it’s hard not to imagine him making a strong, long-term impact.