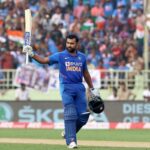 Rohit Sharma seemed perturbed by a question on his batting approach, suggesting everyone should be aware of his playing style by now.

The opening batsman spoke to the press in a virtual press conference on Wednesday, ahead of the five-match T20 series against England. Rohit Sharma was asked how he approaches his batting while playing T20 cricket, as compared to opening for India in ODIs.

“I’ve played more than 100 T20Is now. You should know my approach by now, how I approach, what I do. I don’t need to talk about my approach that I bring into the game. It’s because I have done it for many years now.”

Most runs for #TeamIndia in the Tests ✅

Reply with 🙋🙋 if you believe Rohit Sharma will score the most runs in the Paytm #INDvENG T20I Series too!

Rohit Sharma’s trademark batting style has come under criticism in some quarters. The batsman takes his time to get going in some games, which doesn’t fit well with those who prefer hard-hitting opening batsmen who come out all guns blazing.

The 33-year-old was more descriptive in his responses, later on, explaining how he alters his batting based on the situation he finds himself in and not the format he is playing.

He admitted he looks forward to match situations, with each game bringing a different challenge with it. Rohit Sharma stressed the importance of assessing a situation correctly during a game.

While Rohit Sharma is set to start as India’s opener in the T20s, there are question marks about his opening partner. Both Shikhar Dhawan and KL Rahul are part of the squad, and Rohit Sharma was asked whether his game changes depending on who he is opening with.

“My role doesn’t change. I have to bat in a similar fashion. Make sure I give the team the start and bat for as long as possible. Get the big scores. Nothing changes for me. For me, not a lot changes (when batting with KL Rahul or Shikhar Dhawan). I just need to assess the situation, the pitch, the bowlers bowling at me and stuff like that.”

Rohit Sharma has a stellar record for India in T20Is. He averages 32.62 for the Men in Blue, striking the ball at a rate of 138.78. The batsman explained how he approaches his innings while batting first for India.

“I just need to make sure that if we are batting first, I try and give the team a good start. Then if I’m batting till the first six overs, making sure I bat for as long as possible and take the team to a decent target.”

He also shared how he adopts a different mindset while batting second in the game’s shortest format.

“When we chase, the approach remains the same, but the mindset changes because you have a score in front of you. It depends how you want to bat, how much runs are you chasing and you just have to calculate all those things and bring that into your game.”

Rohit Sharma will play a pivotal role with the bat for India in the 5-match T20I series, which begins on March 12 in Ahmedabad. Considering this series is spoken about as a dress rehearsal for the World T20 later this year, the opener’s form with the bat will be a crucial aspect for the Men in Blue. 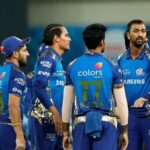 As expected, Mumbai Indians have retained most of their squad for IPL 2021. The side looked well settled last year and is widely regarded as the most balanced outfit in the IPL.

However, they have let go of Lasith Malinga and Sherfane Rutherford. Lasith Malinga is the leading wicket-taker in IPL history, but opted out of the tournament last year due to personal reasons.

Sherfane Rutherford, on the other hand, didn’t feature for Mumbai Indians last season and has been released by the franchise ahead of IPL 2021.

Mitchell McCleneghan has also been let go, while James Pattinson and compatriot Nathan Coulter-Nile make away as well, with Mumbai Indians making wholesale changes to their pace attack.

The rest of the side remains the same, with the side having a solid balance of youth and experience. Under Rohit Sharma’s leadership, expect Mumbai Indians to be the favorites once again.

Mumbai Indians won their fifth IPL title last year – the most in league history. They will seek to become the first franchise to win three consecutive IPL crowns when the tournament begins later this year.