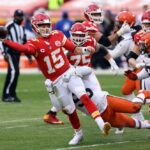 NFL quarterback Patrick Mahomes is dealing with an injury that could impact his play on the field against the Bills on Sunday. Mahomes is dealing with a nagging turf toe injury that he suffered in the NFL Divisional Round Playoff game against the Cleveland Browns. Turf toe could impact the scrambling ability of Mahomes and make him a pocket passer for the first time in his career.

We can almost guarantee that the Buffalo Bills have been watching film and developing blitzes to pressure the young quarterback. If the turf toe injury does in fact impact the ability to scramble for Patrick Mahomes, then Buffalo will pin its ears back and come after him a lot. We won’t know until we see how Patrick Mahomes moves in the pocket and outside of the pocket on Sunday.

So the big question that a lot of NFL fans are asking is, what is turf toe and how does it impact an NFL players movements on the field.

According to WebMD Turf toe is not a term you want to use when talking to an NFL player. Turf toe is a phrase used to hide the real issue that the NFL player is dealing with. If an NFL player has Turf toe they have sprained ligaments around their big toe joint.

#Chiefs QB Patrick Mahomes was diagnosed with turf toe, sources say, an injury that affected his preparation for the AFC Championship Game more than his time in the concussion protocol.

The ligaments that are strained in the big toe primarily controls the up and down motion of the foot. Behind the big toe there are two pea-shaped bones that work like a pulley system. The pulley tendon provides leverage for the NFL players when they walk or run. These tendons also absorb almost all the weight that presses on the ball of the foot.

When an NFL player has Turf toe, they will have a sharp pain and swelling in the area by their big toe. Patrick Mahomes uses his ability to scramble to make big plays for the Kansas City Chiefs offense. It has been said that his Turf toe injury could require surgery after the 2021 NFL Playoffs.

This injury could impact the running ability of Mahomes on Sunday against the Buffalo Bills. Every time Patrick Mahomes puts force on his big toe while scrambling he will feel the sharp pain from his Turf toe. Luckily for Mahomes his Turf toe injury is not on his back foot, so it won’t impact him throwing the football.

Buffalo Bills defensive coaches will pay close attention to Patrick Mahomes and watch to see how the Turf toe impacts his play. If the Turf toe limits his mobility then look for Buffalo to blitz a lot. This injury has the potential to make Patrick Mahomes a pocket passer for the first time in his young NFL career.