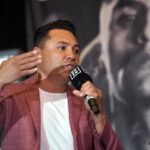 Oscar De La Hoya is returning to the ring.

After years of teasing the possibility of a comeback, the Hall of Fame former six-division titlist is now prepared to make good on that promise. De La Hoya confirmed the news while making a cameo appearance during a Triller Fight Club press conference Friday afternoon in Las Vegas to otherwise discuss the April 17 Pay-Per-View show headlined by Jake Paul and Ben Askren.

Details of the event—including a location and opponent—have yet to be revealed as this goes to publish, nor has it been determined whether it will be a sanctioned fight or an exhibition. The fight will headline a pre-4th of July PPV event as part of the Triller Fight Club series.

De La Hoya (39-6, 30KOs) has not fought since suffering a one-sided stoppage loss to Manny Pacquiao after eight rounds in their Dec. 2008 HBO Pay-Per-View headliner at MGM Grand in Las Vegas. The setback put an end to one of the most storied careers of the last 30 years, with the fighting pride of East Los Angeles forced into retirement just shy of his 36th birthday.

The 1992 Olympic Gold medalist and six-division champ has since spent his time serving as one of the sport’s leading promoters, heading Golden Boy Promotions which he founded and currently serves as chairman. Still, the urge to return to the ring has repeatedly surfaced although his frequent claims of once again lacing ‘em up often falling on deaf ears.

Friday’s announcement caught many in the industry by surprise, even if De La Hoya himself has offered subtle hints. The ‘Golden Boy’ has kept himself in relatively decent shape, claiming to be somewhere around 175 pounds although undoubtedly trimming down by the time July rolls around.

De La Hoya claimed major titles at junior lightweight, lightweight, junior welterweight, welterweight, junior middleweight and middleweight over the course of his storied 16-year career. His supreme skill set and camera-friendly looks aided in his becoming the biggest box-office attraction of all-time prior to his retirement in 2008, surpassed only by Floyd Mayweather Jr. in that time. The two participated in the highest-grossing boxing event in history at the time of their May 2007 clash, which Mayweather won by 12-round split decision. 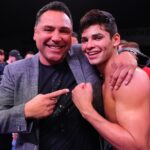 There was a time when Oscar De La Hoya wasn’t nearly this confident about how Ryan Garcia would fare versus Gervonta Davis.

Based on Garcia’s considerable improvement while working with trainer Eddy Reynoso, though, “The Golden Boy” doesn’t think the undefeated Davis would stand a chance against the fighter his company promotes. De La Hoya primarily mentioned Davis during a press conference Thursday as the lightweight champion he wants Garcia to fight “when” Garcia beats Luke Campbell on Saturday in Dallas.

The 22-year-old Garcia (20-0, 17 KOs) has regularly mentioned Baltimore’s Davis (24-0, 23 KOs) as his preferred potential opponent throughout the buildup toward his 12-round, 135-pound title fight against England’s Campbell (20-3, 16 KOs). The fourth-ranked Garcia, of Victorville, California, and the third-rated Campbell, of Hull, England, will fight for the WBC interim lightweight title in the main event at American Airlines Center.

Davis, meanwhile, owns the WBA world 135-pound title and the WBA “super” 130-pound crown. The left-handed knockout artist is open to taking his next fight either in the lightweight division or at the junior lightweight limit.