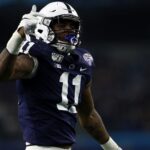 Before last season, the New York Giants had a massive hole at the linebacker position. Luckily for the team, they brought in Blake Martinez, formerly of the Green Bay Packers, and a lot of their issues were quickly resolved. Martinez basically tackled anything that moved, registering 151 combined takedowns of ball carriers last season.

With that said, New York will continue to try to bring in talent at that level of the defense, as opposing offenses are now very well aware of Martinez’s skill set, and will try to game plan against him.

Who are some linebackers that the Giants could try to obtain in the upcoming 2021 NFL Draft?

In many NFL mock drafts, Penn State Nittany Lions linebacker Micah Parsons is the first linebacker off the board. The Giants pick at 11, and Parsons seems to be slotting in between 10-20 in many prognostications, so he should certainly be available when they’re on the clock. He would be a high upside addition to an improving Giants defense.

Parsons decided to opt out of the 2020 college football season, so teams will have to pull up his tape from his prior seasons in Happy Valley. His junior season was relatively Blake Martinez-like, as he was seemingly involved in almost every play. Parsons had 109 total tackles in 2019, with a solid 5 sacks. If the Giants pair Parsons with Martinez, they’ll have two players who will be able to cover an impressive amount of ground around the line of scrimmage.

Another option for the Giants could be Notre Dame’s Jeremiah Owusu-Koramoah. While Parsons seems to be regarded as just a little bit better than Owusu-Koramoah, the latter’s participation in the 2020 college football season could sway New York to take him—if not over Parsons, after Parsons if he’s already off the board.

Owusu-Koramoah has never quite put up the eye-popping statistics that Parsons has, but his last two years at Notre Dame were extremely consistent. He has played in 25 games in the last two years and posted double-digit tackles for losses each season. Koramoah is a little smaller physically than Parsons, but profiles as a solid fit in today’s NFL. At a svelte 215 pounds, he figures to be able to run with running backs and receivers.

Zaven Collins could be another alternative for the Giants, but they’ll likely be more inclined to take him if they trade down from number 11 into a later pick in the first round. They could also try to move up from number 42 in the second round if Collins is sliding. Out of the University of Tulsa, Collins didn’t face the same level of competition as the prior two prospects did, but still has attractive redeeming NFL qualities.

According to Pro Football Focus (as highlighted below in the tweet), Collins has exceptional skills in pass coverage coming out of college. His passes defended statistics have remained relatively static during his college career, but his interception totals spiked in 2020. Collins picked off 4 passes last season and averaged 38 yards on the run backs of each of those turnovers. He’s a versatile player who should be on the field on third downs, regardless of the down and distance. 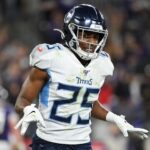 The New York Giants are set to meet with former Tennessee Titans defensive back Adoree Jackson. New York has made great moves this offseason and if they can acquire Jackson, it will add to their list of good signings. The Giants brought back Leonard Williams, signed Kenny Golladay, signed John Ross III, and could now potentially sign Adoree Jackson.

New York Giants head coach Joe Judge is entering his second season with the team and has made moves to put the Giants back in the playoffs. With the NFC East coming off one of the worst seasons in division history, the Giants have a good chance at winning their division in 2021. The New York Giants need help in their secondary and Adoree Jackson has the skill set to make major contributions.

Jabrill Peppers and Daniel Jones were huge contributors to the New York Giants signing Kenny Golladay. Now the Giants need the two to work their magic again so that they can land Adoree Jackson, who has spent his entire career with the Tennessee Titans starting 41 of 46 total games that he has played with the team.

One of the most important people in the Giants entire organization this week?

Played a big role in the recruitment of Kenny Golladay, including a dinner together in Hoboken. Now, he’s chatting with FA CB Adoree Jackson, making case for Big Blue.

I’m told the #Giants have put a “high priority” on signing Adoree Jackson. DBs Jabrill Peppers and Darnay Holmes are both recruiting the playmaking corner. Remember, Kenny Golladay’s cap hit was negotiated down – leaving ample space for the G-Men to try and sign Jackson.

Jackson’s interception numbers are not eye-popping, but his pass deflections is a great number at 33. This shows that Adoree Jackson has the ability to lockdown wide receivers during the game. The third area that pops up is his total tackles. His 200 total tackles consisted of 176 solo tackles and 24 assisted tackles.

Nate Ebner, a three-time Super Bowl winner with the New England Patriots, will return from NFL to compete for a place on the US Olympic men’s rugby sevens team.

On Monday, USA Rugby announced that the New York Giants safety and special teams player was joining a group of around 30 men seeking one of 12 spots in Tokyo later this year. Ebner, who played rugby as a child in Dublin, Ohio, at Ohio State and for US junior teams, sought and won a place at the Rio Olympics in 2016, when rugby union returned to the fold after more than 90 years.

“We are very excited to welcome Nate back into the pack,” said the USA coach, Mike Friday. “Nate is an authentic, good man who carries himself with humility, has a burning desire to achieve and a passion to embed rugby and its values in the American sporting landscape. He is a Dawg, a Pioneer and will be up for the challenge.”

Under Friday, an Englishman who often refers to his hard-working players as “dawgs” (“Pioneers” is a reference to a 2018 documentary), the US men finished second on the 2019 HSBC World Rugby Sevens Series, qualifying for Tokyo behind only Fiji, winners of Olympic gold in Rio. The Eagles finished that tournament a disappointing eighth.

“Not getting a medal in that last Olympics is something that really bothers me,” Ebner said. “When I reflect on what’s important in my life, if I’m being honest, that was high priority. People say, ‘You were the guy who won a gold medal in the Olympics,’ and I’m like, ‘No, we didn’t win a medal.’

“… I thought that we had the team to do it, and as I look at the growth in the last five years, we definitely have an even better chance this time around. It’s something I would really like to be a part of.”

Heralded as “the most interesting player in the NFL … a Jewish Olympic rugby player who never played high school football, was a college walk-on and seldom actually plays safety”, Ebner joined the Giants last March after eight years in New England. The New York head coach, Joe Judge, was special teams co-ordinator with the Patriots when Ebner first returned to rugby.

“We know that rugby has been an important part of Nate’s life since he was a young man,” Judge said on Monday, “and encouraged him to pursue this opportunity. Nate’s rugby training will keep him in great shape this offseason, and we will stay in touch with him as he goes through the process.”

Ebner is now 32 – relatively old for an international sevens player, though Perry Baker, once a wide receiver now twice world sevens player of the year, is 34.

“I’ve been playing NFL football for the last [nine] years and that’s not easy on your body,” Ebner said. “Over 30 in the NFL is an old person. In rugby, there are some older guys but really it’s not about me being 32 in rugby, it’s the journey I’ve had.

“There are guys who are 24 and they’ve had all kinds of injuries. Everyone’s personal situation is different with their body and their age and the wear they’ve had to endure, so hopefully I can hold up.”

The coronavirus pandemic played havoc with sevens, ending the 2020 calendar early, but the US men and women played in Madrid last month. The Olympics were delayed too but the rugby is now scheduled for 26 to 28 July – around the start of NFL training.

“The physical, cardiovascular demands of this game are through the roof relative to football and it’s not even close,” Ebner said. “We don’t get to stop every six seconds after the play is over. It’s just absurd. [In 2016], physically what it took for really six to eight weeks to get myself where I needed to be was extremely difficult. At least this time around I know what to expect physically because I’ve been through it.

“Obviously, you have to assess where you’re at, but you would hope within a week of competition I’m back and I’m in shoulder pads and a helmet and I’m out there trying to get us ready to win some football games.”

It will all add to a remarkable personal story which Ebner will tell in an autobiography due out in May, under the subtitle A Father’s Code and a Son’s Path. Jeff Ebner was murdered 13 years ago. Ebner has since worn a bracelet featuring his father’s motto, now his own book’s title: Finish Strong.

Speaking to the Guardian in 2016, as he first aimed to return to rugby, he said: “I think Dad would be proud of me and I’m proud he was my Dad.”