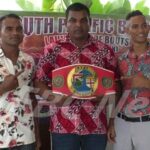 21-year-old decorated Fijian amateur standout, The Prince of Fiji, Nathan “The Hornet” Singh (3-0), returns to the ring on March 20th at Prince Charles Park as the co-main event of a big Fiji event.

Fighting out of Suva, Singh made an impressive professional debut and has quickly moved to 3-0 in the pro ranks and is set to challenge Ronald “The Terminator” Naidu for the Fijian national junior welterweight title over 10 rounds.

Singh has not fought since February due to the global pandemic and is relishing his chance to get back in the ring and challenge for his first title.

For his part, Naidu is the vastly experienced fighter, with 18 professional fights and an accumulative 111 rounds, and a former Australasian champion in his own right.

Singh is not looking to waste time in the pro ranks and is fighting for the national title in just his fourth fight and discusses his opponent and his future plans.

“Ronald is the more experienced fighter in the professional ranks and despite the fact that I’m moving up to fight him, I’m grateful that he has accepted the challenge. I’ve been waiting for the NABF super featherweight champion Sachin Mudaliar and brother who is the current Fiji lightweight champion for over a year – but I’m looking to the future and I’m ready to fight anyone,” Singh said.

“I’m not interested in the money, I’m interested in fighting and getting closer every day to a world championship. I’m 21 and have plenty of time. My manager Tony Tolj has been working hard behind the scenes and I plan on being a seven weight division champion from super flyweight to super lightweight and then then go abroad and put Fiji boxing on the map.”