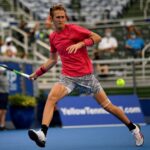 Sebastian Korda survived a first-round scare at the Quimper Challenger, coming back from 1-5 down in the deciding set tie-break before eventually outlasting Tristan Lamasine.

Korda won 7-6(3), 4-6, 7-6 (7) in a 150-minute long, energy-sapping encounter, and will now take on another Frenchman in the form of Mathias Bourgue. The 214th-ranked Bourgue defeated Lukas Rosol in straight sets in his opening round fixture.

Given his recent performance at the Delray Beach Open – where he finished as the runner-up – Sebastian Korda was expected to cruise through his opening round fixture in Quimper. But that was not to be as Tristan Lamasine played one of the matches of his life, before he was betrayed by his nerves in the closing stages of the match.

The 20-year-old Korda is seeded second at the event and is among the favorites to lift the title. Anything less than that would be a disappointment for the youngster, who skipped the Australian Open qualifiers earlier this month.

Mathias Bourgue on the other hand had tried his luck in the qualifying rounds but failed at the last hurdle, where he lost to Botic Van de Zandschulp. The Frenchman is not a very well-known name on tour, with his only major achievement being making the second round at the 2016 French Open – where he famously took eventual runner-up Andy Murray to five sets.

Mathias Bourgue isn’t very prolific on the Challenger tour either, having made just five finals throughout his career. But the 27-year-old is playing well at the moment, as evidenced by his solid performance against Lukas Rosol.

Bourgue delivered seven aces against the Czech and didn’t drop serve a single time. The fact that the Frenchman faced just one break point all match is another indication of his form.

The head-to-head between Sebastian Korda and Mathias Bourgue is currently at 0-0; this will be their first meeting on tour.

The young Sebastian Korda has given several glimpses of his talent in 2021 so far, and will be hoping to continue his good run of form. Armed with a wide range of groundstrokes and the unique ability to hit flat even from well back in the court, Korda can hurt anyone on tour.

But Mathias Bourgue is a solid returner, and he will be expected to ask questions of Korda’s serve – which was a little inconsistent against Tristan Lamasine. The Frenchman will also hope that his own delivery holds firm, much like it did against Lukas Rosol.

Korda is not renowned for his patience, and some consistent service games from Bourgue could make the American rush into his shots. That said, Korda has a wider skill-set than his opponent and can be expected to figure the Frenchman out eventually.