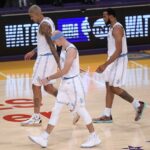 The struggling LA Lakers will host the visiting Cleveland Cavaliers at the Staples Center on Friday. The defending champions are on a four-game losing streak following the ankle sprain that LeBron James suffered against the Atlanta Hawks on Saturday.

Their latest debacle came at the hands of the Philadelphia 76ers on Thursday. The 109-101 loss underscored how much the LA Lakers miss James and Anthony Davis. Generating points has been a struggle for the Purple and Gold in the past four games. But they have had trouble stopping other teams from scoring as well.

They have a good chance of stealing a victory against the Cleveland Cavaliers, who are also missing many of their key players. Though they have won three of their last five games, the Cavs have had to make do with makeshift rosters that adjust with every player that becomes unavailable.

For Friday’s matchup with the LA Lakers, the Cleveland Cavaliers may once again be without Collin Sexton, their leading scorer, aside from JaVale McGee, their backup center who was traded to the Denver Nuggets on Thursday.

Collin Sexton will be a game-time decision because of a sore right hamstring that caused him to miss the Cleveland Cavaliers’ game against the Chicago Bulls on Wednesday.

Forward Taurean Prince has a sprained left shoulder which has kept him from playing since the All-Star break. The veteran forward will also be a game-time decision, but don’t expect him to play until the Cavs update his status.

Five-time All-Star Kevin Love will be out for the seventh straight game after aggravating his calf injury. The right calf soreness will continue to sideline him for the LA Lakers game.

Finally, another one of the Cleveland Cavaliers’ veterans will remain sidelined on Friday. Matthew Dellavedova is still recovering from an appendectomy, and the team has not yet set a timetable for when he can play this season. Though he came to practice last weekend, he has yet to appear in a game.

LeBron James was given a four-to-six-week window for when he could be back on the court, per The Athletic’s Shams Charania. With that timetable, James’ right high-ankle sprain will keep him from playing until the mid-to-late part of April.

The LA Lakers’ other star, Anthony Davis, will be re-evaluated on March 26. His dual injuries (calf strain and Achilles tendinosis) have kept him from playing since Feb. 14. Yet, the LA Lakers are willing to lose more than a few more games to get him ready for the playoffs. But he may be back in two weeks, according to a recent report from Shams Charania.

Forward Jared Dudley was on the bench as a spectator during the Lakers’ loss to the Sixers last night. For his torn right MCL, which is often a career-ending injury, he has opted for rehab rather than surgery. Dudley could join the team in the locker room when the Purple and Gold make their title run.

Sexton’s absence against the Bulls elevated Cedi Osman to the starting lineup as the team’s starting small forward, with Isaac Okoro sliding to the shooting guard position.

Dylan Windler and Quinn Cook might play a few minutes depending on how coach J.B. Bickerstaff sees the matchups.

With no Taurean Prince around, Dylan Windler, Damyean Dotson, and Lamar Stevens have played more minutes in the rotation.

Love’s absences have given Larry Nance Jr. the starting power forward spot for the Cleveland Cavaliers. Meanwhile, Dellavedova has not played a single game this season.

Kyle Kuzma has taken over the four-time MVP’s small forward spot in the starting lineup, with James missing the past three games. Meanwhile, Markieff Morris has become the starter in place of Anthony Davis.

The LA Lakers have featured Dennis Schroder and Montrezl Harrell heavily on the offensive end without the two stars. But Kuzma finally showed up big in their last outing.

Jared Dudley’s absence has not been a factor in the LA Lakers’ rotation as he didn’t play that much before the injury.

Also Read: NBA Rumors: LA Lakers could pursue Avery Bradley if he gets bought out