Thursday press conferences have been team-mates only since the start of last season but the combinations have been mixed up for Imola; Lewis Hamilton with Sebastian Vettel, Max Verstappen with Mick Schumacher; Watch Emilia-Romagna GP live on Sky Sports F1

Lewis Hamilton will address the media alongside Sebastian Vettel – rather than his Mercedes team-mate – ahead of this weekend’s Emilia-Romagna GP as Formula 1 mixes up the press conference order for a Thursday twist.

Since the start of last season, Thursday press conferences have been staggered team by team so to remain in the Covid-secure ‘bubbles’ – with team-mates sitting next to each other to answer questions.

But for the Imola weekend – the second of the 2021 season – the driver combinations are being swapped around on media day.

Multiple world champions and former title rivals Hamilton and Vettel, who is now with Aston Martin, have been paired together, while Hamilton’s new main challenger-in-chief Max Verstappen will be alongside F1 rookie Mick Schumacher.

Fernando Alonso and Lando Norris is another interesting, McLaren-linked, combination for Imola’s media day, which precedes a much-anticipated weekend of track action after a thrilling season-opener in Bahrain.

Sergio Perez and Carlos Sainz, new drivers for Red Bull and Ferrari respectively, are set to kick-off Thursday’s press conference schedule from 1pm BST, and you can watch it all live on Sky Sports F1.

Pierre Gasly and Yuki Tsunoda are the only team-mates who have been kept together.

The press conference shake-up sees F1 return, tentatively, towards its Thursdays of old – which used to see five drivers, usually from five different teams, line up alongside each other for questions.

Since the first Grand Prix of 2020 in Austria, the only times drivers have been near each other in a press conference have been when the top three from qualifying and the race have answered questions after those respective sessions.

They will still be virtual press conferences at Imola, meaning there will just be one host present with the drivers in the press conference room, with questions submitted by journalists remotely.

The Emilia-Romagna GP – and IndyCar – schedule on Sky F1

The battle continues this weekend… 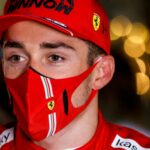 Charles Leclerc sent the SF90 in which he won the first two races of his Formula 1 career; Ferrari driver and the rest of the 2021 F1 grid are back in action at Imola from Friday at the Italian team’s first of two home races this season

Charles Leclerc received a special delivery from his Ferrari team in the ‘post’ at his home in Monaco – the F1 car he claimed his two race wins in.

The 23-year-old posted the images on Instagram of the SF90’s arrival at his home, dispatched from his team in the three-week break in races at the start of the new season.

The SF90 was the Ferrari that Leclerc made his outstanding debut in for the team in 2019.

Outscoring four-time world champion Sebastian Vettel over the season at the first attempt, Leclerc claimed seven pole positions and during that summer won on consecutive weekends at Spa and Monza, Ferrari’s home race.

That stunning early form earned him a new contract to the end of 2024 and effectively saw him usurp Vettel as the Scuderia’s lead driver, with the German not offered a contract renewal for this year and since replaced by Carlos Sainz.

Ferrari have found the going significantly tougher since 2019, with no victories since three overall that season, but have showed early signs of improvement with their latest car. Leclerc qualified fourth and finished sixth in the Bahrain season-opener two weeks ago, with Sainz eighth on his debut.

The Italian marque now head into their first of two home races this year as F1 next weekend returns to Imola for the second time in the space of five months at the Emilia-Romagna Grand Prix. 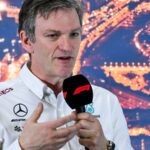 James Allison to step away as head of technical division in July to become Mercedes’ chief technical officer; Wolff says Allison has made ‘enormous contribution’ to Merc success; Allison, who will be replaced by Mike Elliott, will aid the team in new strategic role

Mercedes F1 technical director James Allison will step back from his role this July, the team have confirmed.

In a significant reshuffle for the sport’s world champions, Allison – the highly-respected designer and engineer who has helped Mercedes onto unprecedented success since joining from Ferrari in 2017 – will discontinue his day-to-day technical operations and step into a more strategic, and newly-created, role of chief technical officer.

He will be replaced as technical director by Mike Elliott from July 1.

“I firmly believe that people have a shelf life in senior roles in this sport, and I have chosen to step away from my role as Technical Director in order to pass on the baton at the right time for the organisation and myself,” said Allison.

“I have enjoyed four and a half wonderful years as Technical Director, and it has been a special privilege to lead the technical effort of the team in that time.”

Mercedes boss Toto Wolff said Allison “has been an exceptional technical leader for our team, and he has made an enormous contribution to our performance”.

Wolff added: “We have known for a while that his time as Technical Director would be coming to an end this year and I am delighted that we have been able to shape this new role to keep him within our motorsport family; he will be an important sparring partner for me in the next years and I know that we still have much to achieve together.”

Mercedes say Allison will ‘help the team meet the strategic challenges of the sport’s next era’ in his new role and will ‘continue to work closely with the technical leadership at both Brackley and Brixworth’.

After the 2021 season, there is a major rules and car overhaul in F1.

Elliott, who was previously Mercedes’ head of aerodynamics and is currently technology director, will succeed Allison as being responsible for the day-to-day management of the team’s technical division.

“Mike has developed from our Head of Aerodynamics to now being ready to take the step up to become Technical Director,” stated Wolff. “Together with an exceptional group of senior technical leaders, this puts us in the best possible position for the sport’s next era.”

The Silver Arrows have won both titles in each of the last seven F1 seasons, and are set for a fierce championship battle with Red Bull in 2021.

The first race of 2021 peaked at 2.23 million viewers – placing the Bahrain GP as the highest ever on Sky; Watch every race of the Formula 1 season live only on Sky Sports F1 – with Imola hosting the next GP on April 18

Formula 1’s gripping 2021 season-opening Bahrain Grand Prix was the most watched race ever on Sky Sports, it can be revealed.

The Bahrain GP was watched by an average of 1.98 million viewers, peaking at 2.23 million, as viewers tuned in to watch Lewis Hamilton and Max Verstappen fight for the top of the podium in an enthralling duel.

These figures place the race as the highest viewed ever on Sky, beating previous races that have even been simulcast on Sky One and becoming the first ever race to peak at more than 2m viewers.

Get Sky Sports F1 for just £18 extra a month

Don’t miss a second. Watch every race live, only on Sky Sports F1.

Qualifying viewing figures (averaging at 1.14m with a peak of 1.34m) also saw record viewing figures, with the Bahrain GP becoming the first ever qualifying session with an average audience of more than 1m, as well as the highest ever average peak.

Meanwhile on digital, F1 fans were offered a live-stream of the opening lap of the race on Sky Sports’ social media accounts, which achieved 17.4k total views, of which 9.3k were live, while 2.1m people read an F1 story on its digital platforms last week and a quarter of a million people followed the race on the live blog.

Sky Sports F1 is the only place to watch exclusive live coverage of every race this season. The next race weekend is the Emilia-Romagna Grand Prix at Imola, starting with Practice 1 on Friday 16th April.

When to watch the Emilia-Romagna GP on Sky Sports F1