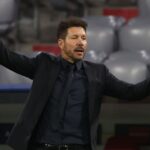 Atletico Madrid are ready to secure Arsenal right-back Ainsley Maitland-Niles on loan in January, according to reports. The La Liga giants want the Englishman as a replacement for Kieran Trippier who was handed a 10-week worldwide suspension for not adhering to the FA betting regulations.

Atletico Madrid are currently top of the La Liga table, tied on points with Real Madrid, but having played two games less. Diego Simeone’s men have been on devastating form this season, winning ten of their 13 games in the league so far and losing only once. They have let in just five goals and are favorites to win the title on current form.

However, Trippier’s suspension could become a problem for the Spanish side. The Englishman has been a regular in Simeone’s side this season and has played every minute in the league as well as the Champions League. Trippier’s suspension means that he could miss as many as 13 games, which is a big blow to Atletico’s title aspirations. And the La Liga side are ready to secure Maitland-Niles from Arsenal on loan as a replacement.

Atletico Madrid were already monitoring the Arsenal right-back before Trippier’s suspension. That decision only hastened their interest and the La Liga giants now want the player on loan next month.

However, it is not clear whether Arsenal would be willing to let the 23-year-old leave for Atletico Madrid. Mikel Arteta’s team is on a poor run of form at the moment. Arsenal were knocked out of the League Cup by Manchester City in midweek and are currently 15th in the Premier League table with just four wins from 14 games so far.

Bellerín is struggling. Ainsley can also play in midfield. We wouldn’t receive a notable fee. His wage is minimal.

Overall, the deal just makes no sense whatsoever, and that’s exactly why the board will probably consider it.

In such a scenario, Arteta might not be ready to sanction a loan move for one of his players. But Maitland-Niles is frustrated with the lack of playing time under the Spaniard and as such could be open to a move to Atletico Madrid. The Englishman has just four starts in the Premier League this season and has struggled to cement a place in the first eleven.

Maitland-Niles was linked to a move away from Arsenal in the summer and was reportedly close to joining Wolverhampton Wanderers. However, the Gunners refused to let the versatile footballer leave, despite the presence of several offers on the table. With Atletico Madrid genuinely interested in the Englishman, Arsenal might struggle to keep him at the club beyond January.