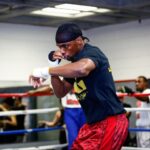 Jackson has pleaded not guilty to 11 criminal charges – including first-degree rape, five counts of aggravated second-degree rape, two counts of production of child pornography and three counts of transportation of a minor with intent to engage in sexual activity.

According to Virgin Islands Daily News, Jackson is finally inching closer to a trial date.

Because of the coronavirus pandemic, Jackson’s trial date has been delayed. It was recently pushed back to February 8th.

Back in February of 2019, Jackson was arrested by V.I. Police after the father of a 15-year-old girl said Jackson gave his daughter alcohol and marijuana brownies and then raped her.

He was initially released on bond. Jackson was later arrested after investigators found a video he allegedly made of himself having sex with the victim – leading to a charge of federal child pornography.

Since then, Jackson has been charged with assaulting two other girls, who came forward with claims of their own.

Jackson (21-4, 16 KOs), who mostly competed at junior middleweight, has been out of the ring since April of 2018, when he lost a five round derision to Eric Walker as part of The Contender tournament.

In his three biggest fights – Jackson lost a ten round decision to Willie Nelson and suffered knockout losses at the hands of Andy Lee and Jermell Charlo. He was well ahead on points when getting stopped by Lee and Charlo.