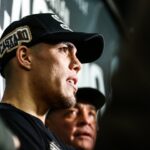 “I am at a fair age to demonstrate my talents and take advantage of that to ensure my financial future. I can’t waste any more time. After the fight when I beat Wale Otomoso, the idea was to go quickly for the title and do at least two fights a year. The COVID problem threw everything back,” Castano told Andres Vazquez.

“[I became worried when my career stalled], especially when they began to talk about a possible fight between Teixeira and the Australian Tim Tszyu. Luckily [my manager] Sebastian [Contursi] moved quickly and the WBO authorities solidified me as the mandatory challenger.”

Castano feels that he took a big leap in his career by winning a world title in the United States.

“This fight is a stepping stone for my career. It is not the same to win a title in Argentina as to do it in the United States, it is valued in a different way, it gives you more relevance. Al Haymon and his promotional company, PBC, have given me a privileged place among the many boxers they have and make me fight the best of my weight,” Castano said.

Castano now has a single goal for his career – to unify the entire weight division.

“My goal is to unify with Jermell Charlo, WBC, IBF and WBA champion,” Castano said.

Charlo, like Castano, is guided by Haymon and Premier Boxing Champions. The fight should be easy to make.