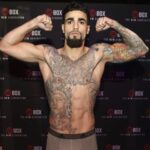 Steven Ortiz didn’t get the hometown rivalry showdown he wanted.

What he does get, is the chance to still fight on Showtime.

The Philadelphia-bred prospect will remain on the March 10 edition of Showtime’s ShoBox series, as he will face New Orelans’ Jeremy Hill (14-0, 9KOs) in a battle of unbeaten lightweights. Both camps have confirmed the matchup to BoxingScene.com, with the fight to take place at the Mohegan Sun Arena in Uncasville, Connecticut.

Hill replaces Philadelphia’s Damon Allen (16-1-1, 5KOs), who was forced to withdraw after suffering a fractured right hand during sparring. Immediate efforts were made to secure a quality opponent to get approved for the show, leaving to Hill who steps well up in class for his televised debut. The 28-year old lightweight at least has a wave of activity working in his favor, managing to fight four times in 2020 including three since the coronavirus pandemic.

In his most recent start, Hill scored a 3rd round stoppage of Travis Castellon last November in Daytona Beach, Florida.

Conversely, Ortiz (11-0, 3KOs) has been out of the ring since an eight-round decision win over Alejandro Salinas in Bensalem, Pennsylvania, roughly 20 miles from his North Philadelphia hometown. The 27-year old Boricua prospect was originally due to face Allen last March in South Philly, only for the event to get shut down by the start of the pandemic.