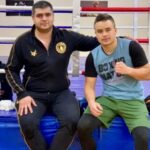 The 27-year-old Abdukakhorov will fight next month for the first time since he defeated former WBA champ Luis Collazo (39-8, 20 KOs) by 10th-round technical decision in October 2019 at Temple University’s Liacouras Center in Philadelphia. Abdukakhorov, who is ranked number one by the IBF in the 147-pound division, became the mandatory challenger for Errol Spence Jr.’s IBF welterweight title by beating Collazo.

Abdukakhorov was scheduled to square off against Sergey Lipinets for the IBF interim welterweight title October 24 at Mohegan Sun Arena.

Once Abdukakhorov’s handlers determined that he couldn’t secure a visa to travel to the United States in time for the Lipinets fight, Canada’s Custio Clayton replaced him on approximately two weeks’ notice. Despite that he was a late substitute, the largely unknown Clayton (18-0-1, 12 KOs), who is ranked fourth by the IBF, performed well and battled the third-ranked Lipinets (16-1-1, 12 KOs) to a majority draw in a 12-round main event Showtime televised.

Abdukakhorov, who had been promoted by Bob Arum’s Top Rank Inc., signed a promotional deal recently with Sampson Lewkowicz’s company. He is now affiliated with Al Haymon’s Premier Boxing Champions as well.

The 34-year-old Flores, meanwhile, will end a 16-month layoff when he battles Abdukakhorov. The strong southpaw knocked out previously unbeaten Mexican Angel Ruiz (16-1, 12 KOs) in the second round of his last fight, which took place in October 2019 in Ontario, California.

Flores previously lost two 10-round unanimous decisions to Ronald Cruz (then 15-1) and Jaime Herrera (then 12-3-1).