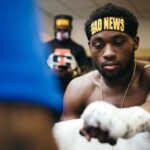 Ring City USA will return this spring, though without one originally intended headliner.

Multiple sources have informed BoxingScene.com that Charles Conwell is no longer due to appear on a previously planned April 8 show to air live on NBC Sports Network and Ring City’s Twitch channel. The 2016 U.S. Olympian and unbeaten junior middleweight prospect was due to face veteran fringe contender Ivan Golub (19-1, 15KOs), only to have to withdraw due to a reported hand injury.

The bout would have marked the second straight appearance on the first-year series for Conwell (14-0, 11KOs). The 23-year-old from Cleveland made a splash in a 9th round stoppage of Madiyar Ashkeyev in their clash of unbeaten prospects last December at Wild Card Boxing Club in Hollywood, California, capping a three-win campaign on the year.

No indication has yet been given as to when Conwell is expected to return to the ring.

As for the April 8 show, a decision will be made on how to move forward. BoxingScene.com has learned of the possibility for its remaining components to roll into a planned April 22 Ring City USA event from a location to be determined. As previously reported by BoxingScene.com contributor Dan Rafael, the latter card will include a clash between unbeaten American heavyweights Jermaine Franklin (20-0, 13KOs) and Stephan Shaw (14-0, 10KOs).

Mrdjenovich’s network appearance came on the undercard of Conwell’s aforementioned win over Ashkeyev, as she scored a well-earned 10-round decision victory over Iranda Paolo Torres. Edmonton’s Mrdjenovich was initially due to face Amanda Serrano (40-1-1, 30KOs) in a multi-belt featherweight title unification clash, only to withdraw from negotiations following the passing of Milan Lubovac, her longtime trainer and mentor dating back to her pro debut in 2003.