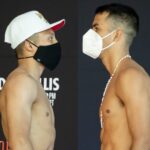 The odds suggest that Matias Romero is in well over his head.

As much is not lost on the unbeaten Argentinean, who—despite boasting an unbeaten record—is a considerable underdog heading into his scheduled 12-round title eliminator versus Mexico City’s Isaac Cruz (20-1-1, 15KOs). Romero is placed at +550 according to sportsbook bet365 for his U.S. debut, which airs live on Showtime from Mohegan Sun Arena in Uncasville, Connecticut (Saturday 9:00 p.m. ET).

“I am ready for this fight,” Romero insisted during the final pre-fight press conference ahead of Saturday’s televised tripleheader. “I want to make sure that the world sees I am a world-class fighter and that I belong on this stage.

“I want to show and prove it wasn’t a fluke that I was selected for this fight, that I’m not some handpicked opponent.”

Romero (24-0, 8KO) was brought in as a replacement opponent for Spain’s Jon Fernandez, who was unable to commit to the fight due to an inability to secure a travel visa.

Still, it was far from a last-minute call for Romero who was always made aware of the possibility of landing on the card. As such, he set up camp at trainer German Caicedo’s sports complex in Miami, where he spent more than five weeks before making his way to Connecticut for fight week.

The live-in facility in Miami—complete with one-bedroom suites—was a far better alternative to the available means back home, thus giving Romero more confidence of producing an upset win this weekend.

“It was a nice change of scenery,” Romero admits. Gyms still aren’t fully available back home in Argentina. There were times when we were training in our living room just to keep active (during the pandemic).

“Sparring is much better here as well. It was easy to find Cruz’s type of fighting style in South Florida.”

Nothing figures to be easy on Saturday night. Cruz is riding a 16-fight unbeaten streak, including a sensational 53-second knockout of former title challenger Diego Magdaleno in his most recent ring appearance last October in San Antonio. The squat Mexican fighter is a healthy -1000 betting favorite to continue his winning ways and emerge as the top-rated WBA lightweight contender.

On the other side, his opponent vows to be ready for whatever is brought into the ring—and with a pretty good sense of the strategy he will see on fight night.

“We are prepared for if—for whatever reason—Isaac Cruz changes up his game plan on Saturday night,” vows Romero. “Our hunch is that a tiger doesn’t change his stripes.”