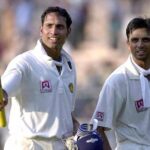 Former India batsman VVS Laxman became nostalgic on the 20th anniversary of his game-changing partnership with Rahul Dravid in the 2001 Kolkata Test against Australia.

On March 14, 2001, VVS Laxman and Dravid batted out the entire Day 4 of the Test against Australia to turn the match, and the series, on its head. Celebrating two decades of that achievement, VVS Laxman wrote on Twitter:

“Can’t believe it’s been 20 years! Honoured and humbled to have played my role in a memorable Test match. To be a part of that wonderful team was magical, as was having a fulfilling partnership with my good friend.”

Having been made to follow on, India ended Day 3 of the Eden Gardens Test at 254 for 4, with VVS Laxman unbeaten on 109 and Dravid on 7.

At the start of Day 4, Australia were favorites to win the Test. However, at the close of play, the same two Indian batsmen returned to the pavilion, unconquered. VVS Laxman remained unbeaten on 275 and Dravid on 155.

Both were dismissed on the final day, VVS Laxman for 281 and Dravid for 180. India, however, completed a remarkable comeback, scripting victory by 171 runs.

They also went on to win the series 2-1 following another legendary duel in the final Test in Chennai.

Tried to distract VVS Laxman by flapping my arms like a bird: Jason Gillespie

Former Aussie fast bowler Jason Gillespie, who featured in the 2001 Kolkata Test, recalled that nothing worked against VVS Laxman on Day 4 of the Test. Speaking about the historic match, Gillespie told Sportstar:

“The talk was basically that they were playing well, however, it only takes one ball or one poor shot and we can get a wicket. Unfortunately, the poor shot didn’t eventuate! I did try to distract VVS by flapping my arms like a bird as I was running in to bowl to put him off! It was one of the best innings in Test history. A superb knock.”

Gillespie also pointed out that VVS Laxman had been troubling him right from his U-19 days. The former cricketer added:

“I remember my first trip to India with the Australian Under-19 side and V. V. S. was hitting hundred after hundred back then too. I was well and truly sick of bowling to him by the end of my career.” 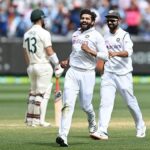 Ravindra Jadeja has revealed that India treated their series against Australia as a three-match series after suffering a crushing defeat in the first Test match.

India were handed a ten-wicket defeat by the Aussies after being bowled out for 36, their lowest ever Test score in the first game. However, they bounced back in incredible fashion to stun the hosts and win the Border-Gavaskar trophy 2-1.

India all-rounder Ravindra Jadeja, who missed the first and fourth Test, has now revealed how the tourists plotted their comeback in the series. He told Sports Today:

“We decided to look at it as a 3-match series from thereon. ‘Let’s forget about the first Test, it’s a three-game series for us’. We decided that we will create positive energy in the ground and boost each other’s confidence by talking, not think or talk about Adelaide Test.”

Ravindra Jadeja was, without a doubt, one of India’s best players in Australia. He starred in all three formats of the game. Despite missing two Tests, he played a vital role in the series win.

The 32-year-old has now revealed that he was only looking to help the team’s cause in any way he could. His mentality clearly rubbed off on his teammates as they played with great togetherness to dismantle Australia. He said:

“I personally decided that I will practice batting in Australia. I had a positive mindset that whenever I will get the chance I will contribute to the team’s cause. Especially in Australia, playing against Australia. It was tough as Australia’s bowling attack was very strong. That was the discussion we had in the team meeting.”

Ravindra Jadeja is now back in India and has been sent to the National Cricket Academy to complete his rehabilitation. He dislocated his left thumb in the third Test in Sydney.

He will be aiming for a swift comeback but has been ruled out for the Test series against England. 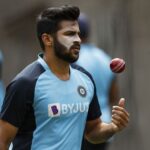 Shardul Thakur, one of the surprise heroes of Team India’s recent triumph at the Gabba, has revealed that picking MS Dhoni’s brains when he was out of the Test team has helped his cause.

29-year-old Shardul Thakur picked up seven wickets in the Brisbane Test, and was also India’s top-scorer with a defiant 67 in the first innings.

Speaking to TOI in an exclusive interview after returning home, Shardul Thakur admitted that conversing with his Chennai Super Kings skipper MS Dhoni has helped him a lot. He elaborated:

“Mostly, I’ve asked him (Dhoni) about how he deals with pressure. He’s dealt with it as a player, captain, member of a losing side. At the same time, he’s received love as a member of a winning side. So, you know, he’s had all kinds of experiences.”

Praising MS Dhoni further, Shardul Thakur added that an upcoming cricketer can learn plenty from him if he keeps his eyes and ears open. He explained in this regard:

“Whenever he shares his experience, we have something to learn from him. He is a kind of man who will say something each and every day and if you’re smart enough to pick it up, you’ll keep learning. Each and every day, you’ll learn something or the other.”

How Shardul Thakur grabbed his golden opportunity at the Gabba

With injuries to Jasprit Bumrah, Ravindra Jadeja and Ravichandran Ashwin, India were forced to play Shardul Thakur in the Gabba Test.

He had made his Test debut against West Indies in October 2018. However, his dream soon turned into a nightmare as a groin injury forced him to hobble off the field after bowling just 10 deliveries.

The Gabba Test was like a second debut for him, and he grabbed the chance with both hands. His bowling in both the innings was lively as he kept grabbing key scalps.

With the bat, his 67 in India’s first innings was worth it’s weight in gold as he, along with Washington Sundar (62), featured in a 123-run stand for the seventh wicket.

The partnership helped India recover from a precarious position of 186 for 6 and kept the team afloat in Brisbane. The visitors, eventually, went on to win the Test by three wickets, following a stunning run chase on Day 5.