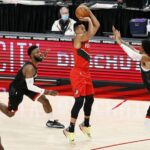 It was an exciting Saturday night of NBA action as the Portland Trail Blazers outlasted the Houston Rockets 128-126 in overtime.

Blazers guard CJ McCollum was on fire in the second half, trading baskets with former MVP James Harden as the two stars practically determined the outcome of the ballgame.

Check out our five hits and flops from the exciting overtime game between the Portland Trail Blazers and Houston Rockets:

CJ McCollum brought the Portland Tail Blazers back from a 10-point halftime deficit through a series of three-pointers that the Houston Rockets had no answer for. McCollum knocked down four straight threes from long distance in the third quarter.

The Blazers guard was absolutely scintillating, shooting the ball with as much accuracy as a veteran NBA 2K user isolating his favorite player on every possession. McCollum made a career-high nine threes in the game to power the Blazers to a win.

He made the game-winning three with 6.3 seconds left in the overtime period to give the Blazers the win.

For the game, McCollum scored 44 points on 17-of-30 shooting overall, including 9-of-16 from beyond the arc.

Damian Lillard started out hot but cooled off in the second half. When his backcourt mate started performing in the third quarter, Lillard took a backseat and couldn’t get his shooting going other than a couple of baskets in the fourth quarter and overtime.

After a poor showing in the Portland Trail Blazers’ first game, Lillard should have been more consistent this time. He missed too many open shots, looking a bit tentative at times. He also missed two clutch shots in regulation, including what would have been the game-winner.

Though he made only 11 of 28 field goals, Lillard wasn’t a complete flop since he still scored 32 for the game.

No other player has more than 2 games with 40-15 over the last 20 seasons pic.twitter.com/ysBOGuI0Og

No one knew what to expect from James Harden in this game, especially with his trade demands during the offseason. However, the 31-year-old was on point from the opening tip, scoring 44 points (with six threes) and adding 17 assists in his first game this season.

He kept the Houston Rockets within striking distance and stopped the Portland Trail Blazers from pulling away when CJ McCollum was scorching hot from the 3-point line in the second half.

James Harden also made a three-pointer with 38.6 seconds in overtime to tie the game at 123-all with 38.6 seconds to go. Moments later, he gave the Rockets a 126-125 lead on a three with 15.3 seconds left in the game. Unfortunately for Harden, McCollum had one more three left in him.

Jusuf Nurkic was outplayed and outhustled by the Houston Rockets’ Christian Wood during the whole game. Additionally, he missed two straight free throws in the last minute that could have broken a 113-all tie between the two teams.

He had his moments as a passer (six assists) and as a rebounder (11 boards), but the Bosnian Beast was mostly tame for the Portland Trail Blazers.

The Houston Rockets’ best pick up of the offseason, Christian Wood, dominated the glass and the paint, putting up 31 points and 13 rebounds. There was no one who could stop him underneath. Had the Rockets looked for him more in the latter stages of the game, the outcome could have been quite different.

Wood knows his spots and what is expected of him. After this game, Houston Rockets coach Stephen Silas should find a way to use him more often especially when the other team goes small ball.