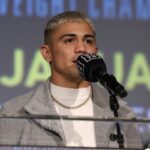 A complaint filed by Heredia Boxing Management to reinforce its existing contract with its top client has been reassigned to the very courthouse reviewing a case to have the company removed from that very role.

Upon review, an order was made to reassign the case to U.S. District Judge John W. Holcomb and Magistrate Judge Kenly Kiya Kato due to a similar or closely related transaction, happening or event. The court to which the complaint now resides is currently overseeing an ongoing lawsuit filed by Diaz against Heredia’s half-brother, Ralph Heredia on October 7, a copy of which has been obtained by BoxingScene.com.

Diaz is represented by VGC, LLC, who is named as a defendant in Moses Heredia’s complaint which only identifies Diaz as an interested party but not as a defendant. Similarly, Moses Heredia is named as an interested party in Diaz’s complaint, through association with his half-brother Ralph, who is identified as Ralph Heredia Tarango and having operated under several aliases, allegedly due to his having served prison time as part of a drug trafficking ring in the 1990s.

Moses Heredia’s complaint alleges an existing five-year managerial contract which runs through February 2022. Diaz’s complaint notes that the day-to-day handlings have been through Ralph, with Moses functionally serving as manager only on paper allegedly due to Ralph’s inability to obtain a Manager’s license with the California State Athletic Commission due to his criminal past.

The complaint against Ralph Heredia alleges that he “repeatedly stole from Diaz—both money and personal property. He did so with the help of an attorney, Defendant John Doe, Esq., whose name Diaz does not know and whom he never agreed to retain.”

According to the complaint, Diaz was first introduced to Ralph Heredia in his early teens and maintained “a cordial relationship… for several years. In or around 2011… Heredia took a greater interest in Diaz.”

Their cordial relationship advanced to the professional level shortly after Diaz’s tour with the 2012 U.S. Olympic Boxing team which competed in London. At that time, Moses Heredia signed the official managerial contract due to Ralph being unable to obtain a manager’s license “likely due to the fact that Defendant Heredia has a documented criminal history and did not want to reveal his true identity to the Commission (or to Diaz).”

The two complaints are similar in more ways than both sides alleging breach of contract and tortious interference. Both cases document the criminal history of the named defendants—alleged criminal activity, in the case of MTK Global and its co-founder Kinahan.

In Diaz’s complaint comes the revelation that Heredia was indicted under the working alias Rafael Bustamante “in connection with a headline-making extortion and threatened murder plot against [former] Los Angeles Rams player Darryl Henley over a $350,000 debt stemming from a drug deal involving over twenty-five pounds of cocaine.

Heredia (under the alias Rafael Bustamante) was convicted along with two associates of conspiracy to possess and distribute cocaine, for which they were sentenced to 20 years in prison. Heredia was released in 2005, while Henley remains in prison with 16 years remaining on a 41-year sentence for drug trafficking and threatening to murder—through hired contract killers—the trial judge and a witness to the case.

Despite Moses serving as the licensed manager, court documents suggest it was Ralph who did all of the legwork including his allegedly leveraging his association with Diaz into a working relationship with Golden Boy. From there, Heredia was able to sign—among others—Francisco Vargas, who would become a 130-pound titlist, and current 140-pound prospect Luis Feliciano.

In the complaint against Heredia, Diaz alleges that the manager stole from him, specifically throughout their renegotiated managerial agreement which was signed in February 2017. In said agreement, Diaz agreed to pay Heredia a fee of 18%, negotiated down from a demanded 20%. In submitted documentation, Diaz points to a contract showing Moses Heredia’s name, and nothing indicating Ralph as a co-manager. This didn’t stop Ralph from acting on Diaz’s behalf to negotiate his current promotional contract with Golden Boy which was made official on March 22, 2017 according to court documents which show both Moses and Ralph Heredia listed as co-managers.

Diaz alleges that Ralph Heredia continued to extract a 20% fee from the boxer in lieu of the negotiated 18%, with the unnamed attorney for Heredia “directly aware of and participated in this scheme to steal the 2% from Diaz. Practically speaking, Heredia also stole whatever portion he received of the 18% manager’s fee from Diaz… able to do this because, by virtue of his role as Diaz’s manager, Heredia has full access to Diaz’s finances, including compensation paid by Golden Boy.”

Attempting to take control of his career, Diaz entered an advisory agreement with Dubai-based managerial conglomerate MTK Global this past August, seven months after soundly outpointing Tevin Farmer to win a 130-pound title. According to the complaint filed by Moses Heredia, the deal was allegedly motivated by a $100,000 advanced paid by MTK to Diaz against his next purse.

Diaz is next due to face mandatory challenger Shavkat Rakhimov on February 13, 2021 in Indio, California.

The complaint filed by Diaz alleges that Ralph Heredia acted in retaliation to this move by repossessing a 2016 Lexus RC350 he had purchased for the boxer last October, to which he agreed to “make a (presumably unlicensed) “auto loan” to Diaz until Diaz could pay it off.”

According to court records, Diaz paid $25,000 towards the car along with an additional $4,000 to have the originally white vehicle painted black. Heredia allegedly repossessed the car this past September—at which time Diaz claimed to have another $300 in the vehicle— in retaliation for Diaz’s entered arrangement with MTK which he insisted was an infringement on his (unlicensed) managerial rights.

Heredia filed a Motion to Dismiss earlier this month, to which Diaz naturally filed an Opposition to Notice of Motion to Dismiss, with a hearing set for January 8, 2021. Both cases will remain under the review of the same court until such time.