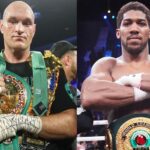 Earlier this month, both Joshua and Fury agreed to their respective portions of a two-fight agreement.

But, the two sides were having issues finalizing a date and location for the first contest.

A few days ago, Hearn presented both sides with “multiple” site offers.

Hearn has not revealed which site was approved by the two teams – but it’s long been discussed that Saudi Arabia was the frontrunner to host the first encounter.

The promoters are now finalizing all of the location particulars and the date.

“Both sides have approved the site offer that they want to go with, and now we’re just finalizing the site deal and we’re in a great place. I saw Tyson yesterday. I just messaged him and said, ‘I’m in Vegas, I’m in your hotel if you fancy a cuppa,'” Hearn told Behind The Gloves.

“We just had five or 10 minutes together and it was good, because I don’t represent Tyson Fury, so I don’t know what is in his mind. What he basically cemented in my mind was, this is the only fight he wants, and I know that’s the same with AJ. It just good to say, right we’ve got the offer, we all approve. We’re moving forward now. We’re good. It has been agreed by both sides, the option that we will take, and you’ll get the date very soon and the official announcement.

“One hundred percent [we want the fight to happen in the summer]. That’s the thing. Everybody wants this fight as soon as possible. There is no option for this fight to go at the back end of the year, and I’ve made that clear. The hardest thing about securing the site is in this world we live in today, most people would like to kick it to November, December. That’s not available. It was never available.

“What was available was a summer fight for the undisputed world heavyweight championship. That is what you’re going to get. Both guys want two fights this year. One will be in the summer and one will be in December.” 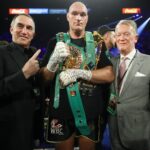 Frank Warren, co-promoter of WBC heavyweight champion Tyson Fury, said he doubts a unification with unified champion Anthony Joshua will happen on a date in July.

The two boxers have reached an agreement for a two-fight series.

But, there is still no finalized date or venue for the first outing.

In the last two weeks, there has been some talk of a date in late July.

Based on all of the different variables, Warren doubts a date in July, or even early August, will come off.

“I’m seeing all these various stories, ‘It’s gonna be Wembley on July 24,’ and so forth. But I don’t see how any of that can happen in July or even early August from my perspective,” Warren told Talk Sport.

“Robert McCracken is AJ’s trainer, he’s also our Olympic team’s head coach, so he’s gonna be in Japan – I think the Olympics start on July 23, and I don’t know what the quarantine period is.

“He can’t be in two places at once. That’s if Robert McCracken’s still training AJ, maybe he’s not training the Olympic squad, I’m not sure. That’s one issue. I don’t believe this fight will go on until – if it’s late August we’ll be very lucky, maybe September.”

Saudi Arabia still appears to be the frontrunner to secure the first fight.

“You can say that, I’ll wait until I see the offer. In the meantime, we’ve been having discussions at government level with a view to try and get this fight on in the UK if nothing else comes in from elsewhere,” Warren said.

“I’m hoping something will come in from elsewhere. We’ve had really good responses from them [the government], they’ve been very helpful and our discussions continue.”

Fury has been out of action since February 2020, when he stopped Deontay Wilder to capture the WBC title.

Joshua returned to the ring in December. He knocked out mandatory challenger Kubrat Pulev in nine rounds to retain the IBF, IBO, WBA, WBO heavyweight titles. 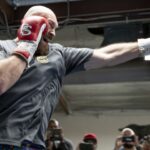 And, Atlas believes Fury can win the fight by knockout.

Fury and Joshua have both signed on for a two-fight series, with the first contest to take place on a date in June or July.

Joshua has bounced back after suffering his first career defeat in June 2019, when he was stopped by Andy Ruiz in seven rounds.

The British star outboxed Ruiz in their December 2019 rematch and then knocked out Kubrat Pulev a year later in a mandatory defense.

Atlas expects Fury to take Joshua back to the “dark place” of his first career defeat.

“I think Fury could stop him. I like AJ, he’s a good fighter, he’s got good talent, he’s had a great comeback. I like all that,” Atlas stated on The Fight podcast.

“I think there could be a blackout again, where his confidence [goes]. When I say the electricity, the light, I attach it to confidence, belief, mental strength and durability. I think that a blackout could happen in that generator of his again. He’s not far from removed from being taken back to no lights. So I’m going with Fury.

“Joshua can punch, Joshua’s a banger. He gets into position, but he’s going to have to get into that position. Because Fury is more versatile, Fury has more say because he can do more things.”