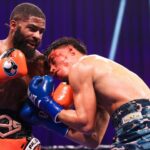 Given the way factions align, and subsequently behave, in the current environment there are realistic and sometimes unrealistic hopes for fans.

The most realistic hope, the place where fans should hold factions most accountable, is in delivering the best of what they can. Where healthy matches are available under one umbrella, are they being made?

Jr. featherweight is a healthy weight class right now. The PBC/Fox/Showtime piece of the US market is well invested there. On Saturday night, it delivered a pair of good matches on paper and a main event that was a little better than good. It might also have served notice of a new star.

For twelve rounds, Stephen Fulton and Angelo Leo let the leather fly, battering each other to the head and body. It was a war worthy of a weight division best defined by them.

Along with Muradjon Akhmadaliev’s win over Daniel Roman in early 2020 and Luis Nery’s arrival in the title ranks last fall, the division has seen an overhaul in the title scene with three undefeated 26-year old battlers holding the four most notable belts in the class. There is more than enough supporting cast to make the next couple years memorable.

Let’s get into it.

The Future for Fulton: After the fight, Fulton sounded all the right notes. He expressed interest in unification and in-house that would make Nery the likely first target. Nery may be headed to a showdown with Brandon Figueroa, a WBA sub-belt holder, so Nery would have to hold serve. Akhmadaliev is set for a defense against former titlist Ryosuke Iwasa and fights outside the PBC tent but, with the WBA and IBF belts to his name, no one can unify without him. Raeese Aleem was excellent on the undercard of Fulton-Leo and would be a quality opponent for Fulton as would Roman. Fulton has some really good options and, after Saturday, the sort of violent bona fides that validate him as genuinely tested. Fulton may be the most naturally gifted of the cohort at Jr. featherweight and, with a few more contender/title level wins like he had this weekend could soon find fans drooling about the possibility of a showdown with the king one class below. Is Fulton versus Naoya Inoue a possible, ultimate destination? By the end of 2021, it just might be.

The Future for Leo: If Leo had a little more natural pop, Saturday might have gone a little different. He had Fulton rubber legged in the fourth and had real success with the right hand upstairs. Strong, gritty, and with plenty of gas, Leo’s problem was a lack of dimensions to his game. Leo is a very good, well rounded talent but there were a lot of rounds where an extra wrinkle here or there made the difference. The final scores, giving him two rounds on one card and one on the other two, sounded unfair to some. They were more a case of the misfortune of official scores not capturing the full context of a fight. He gave everything he had and just came up short. There is room to improve. Leo can mix right back in with the rest of the class and would also make for excellent rounds with someone like Roman. Losing is part of sports but when one wants to see a winner and loser again after a fight, the fans got a show. Leo is welcome back as soon as he’s ready.