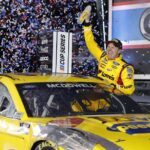 One of the best things about NASCAR racing in Las Vegas and Phoenix is that you don’t have to worry much about the weather, except maybe the warm temperatures.

In Friday’s NASCAR Xfinity Series event, it was cool by comparison to the Cup Series race the next day. The track was 30 degrees warmer on Sunday, but the weather had little effect on either race.

For the first time this year, the NASCAR Xfinity Series had a repeat winner with Austin Cindric putting his No. 22 Team Penske Mustang into the winner’s circle. That was followed by Martin Truex Jr., who became the fifth different driver this year in the NASCAR Cup Series, besting Joey Logano in his No. 19 Joe Gibbs Racing Camry. It also happened to be his first victory since Martinsville Speedway last June. He is the second driver from JGR to punch a ticker into the NASCAR playoffs after Christopher Bell won on the Daytona Road Course.

A NASCAR driver going in reverse?

The season started with a bang. By winning the Daytona 500, Michael McDowell secured his NASCAR playoff spot, leaving the rest of the season to just drive and collect as many bonus points as possible. So much for those plans after five races.

McDowell followed up his victory in the Great American Race with an eighth and sixth, respectively, at the Daytona Road Course and Homestead-Miami Speedway. A P17 at Las Vegas was thought to be an anomaly, but it was P23 in Phoenix on Sunday.

As far as collecting playoff bonus points, he has none. He has not won a stage in any NASCAR race. As far as stage points, he has precisely four. He is tied with Cole Custer and Matt DiBenedetto, with only Aric Almirola (3) and Ross Chastain (2) behind him.

It’s still early, but the trend has to worry Bob Jenkins, the Front Row Motorsports owner. His other car, driven by Anthony Alfredo, is scuffling with a season-best finish of P22. A crash 87 laps in ended his day on Sunday. However, McDowell was getting his props for the early-season success, and there was talk of him having a great season. Now?

As NASCAR heads back to the east coast, the next race is at Atlanta Motor Speedway, a track that has not been good to McDowell. In 10 starts at the Georgia venue, his best is a P22 twice and he has an average finish of 33.8. Maybe he can look to the Bristol dirt race to get things back on track.

It is hard to celebrate a first top-10 of the season, but Justin Allgaier almost saw that vanish on the final two laps of the NASCAR Xfinity Series Call 800 Before You Dig 200. Restarts are always chaotic at Phoenix Raceway, and even though he was supposed to be on the front row, he used the choose-rule to line up behind the race leader.

When the green flag waved, the mad scramble began, and Allgaier got some help getting into the wall, ending his chance at the win. He would finish a disappointing P8, but considering how his season has unfolded, it’s as close as he has been to finding victory lane. It’s also a lot better than his teammates at JR Motorsports.

As a team, JRM has struggled out of the gate with one top-five (Noah Gragson at Las Vegas) and six top-10s through five NASCAR Xfinity events. The dark cloud that has followed the team hovered over Phoenix, with three of the four cars failing to make it to the end of the contest.

Noah Gragson was the first one out after 67 laps with a blown engine marking his third DNF of the season, finishing P39. His crew didn’t know it was an issue until they saw it on the Fox Sports 1 feed. Michael Annett would also lose a motor after running in the top 20 for most of the race. He made it to Lap 93 for his second DNF.

Josh Berry had a day he would like to forget. He has four NASCAR Xfinity starts and has more top-10s (2) than any other JRM driver, but it would be a series of calamities that would end his day after scoring a P8 at the end of Stage 2.

Late in the race, he came in for service and had to return to the pits because of loose lugs. He was then bagged for speeding. He restarted P31 in the back with slower cars, and you can pretty much guess what happened next. It was his second crash DNF.

It is hard to get untracked when you don’t finish races. In almost half the starts for JR Motorsports (four cars, five starts), the team has nine DNFs so far. To paraphrase a song from the long-running TV show Hee Haw, “If it weren’t for bad luck, they’d have no luck at all, gloom, despair, and agony on me.”

A NASCAR (fire) suit and Ty, what’s next for the prodigy?

It doesn’t look like his first win in his first NASCAR national series start was a fluke. Some people thought Ty Gibbs got his ride at the Daytona Road Course on the back of his family name. Those same people have no problem with NASCAR drivers not quite ready for prime time getting seat time because they have sponsors to bring with them. It’s an odd position to take, but Gibbs got his chance because he earned it.

It is safe to say; Ty Gibbs is the real deal. The kid wins and wins and wins. Put him in a car and point him to the checkered flag. How are these numbers?

Gibbs won on Friday at Phoenix Raceway in ARCA and started the NASCAR Xfinity Call 800 Before You Dig 200 Saturday. He wasn’t in an enviable position starting P27, but that didn’t stop the 18-year old. At the end of Stage 1, Gibbs was P10. Stage 2 end, he gained one spot to P9. He made runs toward the front in the final stage, but it was the final restart that put him in a position to win again.

The No. 54 Supra avoided the usual Phoenix restart mayhem (see Justin Allgaier above) and came away unscathed and had Austin Cindric in his sights. Gibbs was about five car lengths behind at the white flag and closed the gap only to fall short at the end.

“It was a learning experience more than anything,” Gibbs said in a Toyota release. “I’m just learning how these things race on the ovals, but I’m very thankful to be here. I can’t thank (sponsor) Pristine Auction enough. Just one spot short.”

You can bet that Ty Gibbs will be around at the end of many NASCAR races in the future.