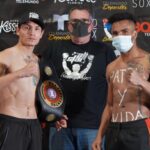 Dennis Contreras continues to breathe new life into his boxing career, with a growing fan base along for the ride.

The March 12 edition of Boxeo Telemundo posted the series’ best ratings since the pandemic, averaging 369,000 viewers over the course of the 90-minute telecast according to Nielsen Media Research. Contreras headlined the show, scoring a 10th round stoppage of Miami’s Hairon Socarras to extend his current four-fight win streak in a thoroughly entertaining clash at White Sands Rehabilitation Center in Plant City, FL.

Ratings for the show improved nearly 30% from the 2021 season premiere one week prior on March 5, which averaged 285,000 viewers. The March 12 show was the best-performing telecast of all 10 shows since the long-running network series returned from the pandemic last August.

Contreras (24-10-1, 22KOs) has fought three times in that span, with “El Martillo” making his series debut last August in a 5th round knockout of Belmar Preciado. The streaking featherweight from Guadalajara returned five weeks later to stop previously unbeaten Carlos ‘El Stich’ Flores inside of six rounds atop an Oct. 3rd show which averaged 191,000 viewers. Both shows aired live without fans in attendance at Osceola Heritage Park in Kissimmee, Florida.

The last show to exceed the March 12 show was the final card prior to the start of the pandemic exactly 52 weeks earlier. The March 13, 2020 edition of Boxeo Telemundo—which aired live from FIT Center in Mexico City—pulled a 2020-best average of 442,000 viewers. Junior flyweight contender Adrian Curiel scored a 10-round unanimous decision over Rosendo Hugo Guarneros in the evening’s main event. 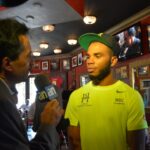 Hairon Socarras isn’t foolish enough to judge any opponent by their record.

Even if it were the case, the lesson was learned after witnessing Dennis Contreras’ recent run.

The two meet at the crossroads this Friday, headlining the next Boxeo Telemundo show live from KO Addiction Boxing & Fitness Center in Plant City, Florida. The scheduled 10-round regional title fight pits Socarras (23-1-3, 15KOs) in a must-win situation, matched against a red-hot spoiler in Guadalajara’s Contreras (23-10-1, 21KOs) whose last three wins have come versus opponents with a combined 52-2-1 record including two unbeaten foes.

“We are more than ready for this title opportunity Friday night on Telemundo,” Socarras said of challenging for Contreras’ WBA Fedecentro featherweight title.

Both boxers shared a card last October, also on Telemundo which took place at Oscoela Heritage Park in Kissimmee, roughly an hour from where they will meet on Friday. Contreras scored a 6th round knockout of unbeaten Carlos Efrain Flores (20-0, 11KOs at the time).

Socarras had a much easier go of things in a 3rd round stoppage of sub .500 Nicaraguan clubfighter Julio Buitrago. The bout was the first for the 28-year-old Miami-based Cuban featherweight since suffering the first loss of his career, a 9th round stoppage at the hands of Ryan Walsh in the quarterfinal section of the MTK Global Golden Contract tournament at York Hall in Bethnal Green, England.

While the fight with Walsh was a considerable leap in competition, Socarras showed signs of why he was previously regarded as a prospect to watch. The visiting fighter jumped out to an early lead, only to quickly fade before being stopped late.

Contreras has proven in two straight Telemundo-televised wins to get stronger as the fight progresses. As much was not lost on his upcoming opponent when accepting this fight, which is viewed as means to burst onto the featherweight title scene.

“We are ready to shine on Friday night,” vows Socarras.