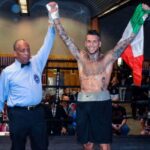 Daniele Scardina produced a dominant performance to extend his unbeaten record at the expense of Spain’s Cesar Nunez, whom he stopped in the eighth round in the headliner on the Matchroom/OPI Since 84 show in Milan on Friday night.

The victory saw Scardina, who went into the fight ranked No 13 by the IBF, claim the vacant European Union super-middleweight belt, although it was wrongly announced by David Diamante both before and after the fight as for the European title. The EU belt is the EBU’s minor belt – the vacant European title is due to be contested soon by another Italian, Giovanni De Carolis and former British champion Lerrone Richards.

It was a good win for the 28-year-old, who is from Milan but boxes out of the 5th Street Gym in Miami. It extended his unbeaten record to 19 fights and his star continues to rise. He did not box in 2020, as the coronavirus pandemic shut down most of Italian boxing, but his time was not wasted as he appeared in the Italian version of Dancing With The Stars, a run that was ended when he tested positive for COVID-19. Indeed, recently Scardina has been as famous for his exploits outside the ring than in it, after a high-profile relationship with Italian television presenter Diletta Leotta.

The Italian dominated the fight at long range, although Nunez had his moments when he got close. By halfway, however, Nunez began to tire and Scardina finished the fight in style.

Although Scardina mostly controlled the early rounds, Nunez was getting close and making the Italian work for it. The Spaniard was a regular threat and he rocked Scardina in the fifth round with a left hook, although the referee, Giovanni Poggi, stopped the action to warn about a clash of heads, giving the Italian a rest. Still, Nunez began the fifth round well, catching Scardina with a crunching left hook, before Scardina came back well.

Scardina looked hurt in the sixth round too, after Nunez landed a big overhand right and then tried to tie Nunez up, with limited success. But Nunez had been unable to follow up his moments of success and in the seventh round there were signs that the Spaniard was getting tired.

In the eighth, Scardina really began to press his advantage, keeping his jab in Nunez’s face and hammering home with the right hand. There was a short break for Nunez after his gumshield was knocked out, but he was starting to unravel. Sensing that, Scardina went for the finish in the final 30 seconds of the round, landing repeatedly with the right, as Nunez stumbled around looking for safety until Poggi stepped in to stop the fight at 2:55 of the round.

Nunez protested the stoppage, angrily pushing the referee, but he looked on the verge if being hurt and could not defend himself.

Nicola Cristofori was denied of the biggest win of his career as he was stopped just 70 seconds from the end of his fight with Maxim Prodan by French referee Ammar Sakraoui after appearing to slip on the canvas.

For ten rounds, Cristofori had danced, moved and totally outboxed his opponent, backing away and picking off the slow and predictable Prodan.

But midway through the tenth and final round of the fight, for the IBF’s international belt, he danced, moved and totally outboxed his opponent backed away, he was glanced by a left hook and seemed to slip back to the ropes, gesturing to a patch on the canvas. Prodan went after him and landed three hooks as Cristofori tried to cover up. They were decent punches, but Cristofori neither looked rocked or hurt, yet Sakraoui jumped in between the pair and waved it off.

It was a mess of an ending. Prodan’s one bit of success in the entire fight came in the fifth round as he floored Cristofori with a left hook. But for the rest of the fight, Cristofori made him look slow and foolish, only to be denied victory in farcical circumstances.

The stoppage saw Prodan retain his title and extend his unbeaten record to 20 fights (one draw).

For the first four rounds, Prodan, who was born in Romania but calls Milan home, was completely predictable. Giving away height, he tried to walk down Cristofori with almost no success. Cristofori used his height well, moving away and picking Prodan off with jabs and one-twos.

Prodan finally found his target in the fifth round, as he launched on with a left hook that caught Cristofori high on the head and dropped him. Cristofori was quickly back to his feet, but Prodan jumped on him, forcing him into the ropes and unloading.

But the pattern went straight back to normal in the sixth round, with Cristofori moving around as he liked and Prodan chased after him. The seventh was better from Prodan, but he still struggled to cut the ring off and was caught flat-footed by the retreating Cristofori.

By the eighth round, Prodan was getting desperate, as was his corner, and the more he loaded up, the wilder he looked. Cristofori’s composure was impressive. If Prodan did land, Cristofori would come back with more. In the ninth, Prodan missed with a left hook by so far that he completely turned around, although one left hook that did land knocked out Cristofori’s gumshield.