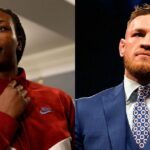 Claressa Shields thanked Conor McGregor for extending his support ahead of her venture in the world of mixed martial arts. The Boxing champion said that she will use the Notorious One’s advice and hopes to have a successful career in MMA.

In a recent interview with Betway Insider, the P4P No.1 female Boxer reflected upon the words of wisdom provided by the former UFC double champion Conor McGregor after she announced her transition into MMA via a social media post.

T-Rex also acknowledged Conor McGregor as one of the greats in the sport. However, she attributed the MMA GOAT status to former Light Heavyweight Champion and teammate, Jon Jones.

“To me, Jon Jones is the GOAT in MMA, but Conor McGregor was considered the GOAT once upon a time too and they’re both great in their own right. I just feel when Conor reached out, I feel like in a way he actually cared and he was wishing me good luck and that’s what I appreciated most. He didn’t have to give me any advice, he could have just seen it and kept on but instead he was like, ‘I’m going to give out this advice’, and it was great. I took it, I use it and hopefully everything goes as it’s supposed to go,” said Shields.

Claressa Shields is expected to make her MMA debut in June 2021. Her contract with PFL permits T-Rex to compete inside both the octagon and the boxing ring. Shields will fight Canadian Boxer Marie-Eve Dicaire on March 5, 2021.

Claressa Shields has a piece of advice for Conor McGregor

When asked if Conor McGregor can avenge his UFC 257 loss against Dustin Poirier, Claressa Shields shared her thoughts on how The Notorious One can avoid the kicks to his leg in the rematch.

T-Rex believes that McGregor needs to get out of the boxing mind frame and make full use of his striking arsenal to be the creative fighter that he used to be.

“I would say he needs to get out of the boxing mindframe to win that fight. He had his front foot too forward, too much weight on his leg, more like a boxer’s stance. It’s like he needs to get back to having light feet and (being) quick and explosive, using all his attributes, not just his punches; punches, kicks, knees, he needs to get back being creative,” said Shields. 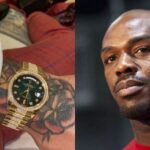 Jon Jones provoked Conor McGregor on Instagram after the Irishman added a picture of his new Rolex watch by remembering an old running joke between them.

In 2016, when McGregor became the first UFC fighter to hold two weight divisions championships simultaneously, and Jon Jones was the light heavyweight champion, the two UFC superstars occupied the first and second spots in the promotion’s pound-for-pound rankings.

Having been ranked in the top position, McGregor mocked Jon Jones on several opportunities, including referring to their Rolex watches. In one of their UFC meetings, McGregor invited Jon Jones to display the luxurious accessory:

To which he replied:

“You know, we have got some [Rolex],” showed off Jon Jones before questioning: “Hey, what do you mean No. 2?”

McGregor comes from a defeat to Dustin Poirier at UFC 257 and currently is No. 15 in the UFC pound-for-pound rankings. Jon Jones remains in second spot, behind only Khabib Nurmagomedov.

When is Jon Jones competing in the UFC heavyweight division?

UFC president Dana White revealed that Jon Jones would probably make his heavyweight debut in a title fight against the winner of the fight between Stipe Miocic and Francis Ngannou. Speaking to BT Sport’s Adam Catterall, the UFC boss explained the promotion’s plans for the heaviest of the weight classes:

“Yeah, Francis deserves this shot, you know. And if you look at what Stipe has accomplished. It’s impossible not to call him the greatest heavyweight of all time. So to see him and Francis square off again. And if… imagine if he can beat Francis again, he will look like an absolute killer,” said White. “Then you would get Stipe and Jon Jones, or you would get Jon Jones versus Francis. I think he’s ready as soon as he sees what happens with the heavyweight championship. I think he would come in right now and fight for it, but you can’t jump over Francis. Francis has earned the shot.”

Would you prefer to see Jon Jones fighting Miocic or Ngannou? Sound off in the comments. 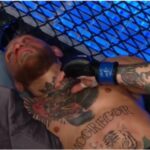 WBO junior middleweight champion Patrick Teixeira believes UFC superstar Conor McGregor is a “delusional clown” for thinking that he could enter the sport of boxing and immediately beat a top level fighter.

McGregor made his boxing debut in August of 2017, against a comebacking Floyd Mayweather at the T-Mobile Arena in Las Vegas.

In that encounter, Mayweather slowly broke McGregor down and put him away in the tenth round. There are many boxing observers who believe Mayweather had intentionally carried McGregor to make it a more entertaining fight for the pay-per-view audience.

McGregor, 32-years-old, was in serious discussions to resume his boxing aspirations by fighting eight division world champion Manny Pacquiao in 2021.

That plan hit a roadblock last month, when McGregor got knocked out in two rounds by Dustin Poirier at UFC 257 in Abu Dhabi.

However, that loss has not steered McGregor away from a boxing return. And he wants to fight a top level boxer and preferably a world champion.

“He’s thinking because Floyd gave him a few rounds to work with, he’s a boxer. I honestly wouldn’t do the same thing as Floyd, I would exterminate him in two rounds, one for him to go up and the other to go down,” Teixeira told The Sun.

“He would take a beating. Conor is just delusional, a real clown. Now, I want to beat that clown up and retire him from the sport of boxing and UFC. I don’t hate Conor, I have nothing personal against him, I just think he hasn’t learned yet that he needs to start from the bottom. He wants to fight big as he did with Mayweather, now he wants Pacquiao. We who are on a higher level kill him easily without a problem, and he will be ashamed on TV.

“I would ruin his career, and he would understand that boxing is for real men, not for clown. He could never take a fight like that, Floyd was nice to him, I wouldn’t be.” 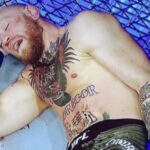 Sean Gibbons, President of Manny Pacquiao’s promotional company, MP Promotions, admits the demand for a boxing match with Conor McGregor has plummeted in the aftermath of Saturday’s loss by the UFC star.

McGregor was knocked out in two rounds by Dustin Poirier in the main event of UFC 257 in Abu Dhabi.

Pacquiao and McGregor are handled by the same management company.

There were serious discussions taking place to match them against each other in 2021, in a cross-sport boxing match.

But the fight is no longer an option as McGregor will now steer his focus to a trilogy fight with Poirier.

“Very unfortunate, it looked like Conor looked past Dustin and got knocked out. Maybe he had the Senator on his mind. I think the demand for the fight is not there presently. Conor has some business to clean up and handle in the UFC. It’s a bummer, it could have been fun for as long as it lasted,” Gibbons told The Sun.

Pacquiao is now in talks for a potential clash with unbeaten lightweight contender Ryan Garcia.

The 42-year-old has been out of the ring since July 2019, when he captured the WBA welterweight title with a twelve round split decision win over Keith Thurman at the MGM Grand in Las Vegas.

For his part, McGregor denied that he was already looking ahead to a Pacquiao fight, but he does reveal the contest was certainly on course to take place.

“I always did want to focus on my MMA career but I’m also open. I’ll just see what happens. I don’t know what will happen. That Manny fight was happening. It was as good as done. I just want to get in and get back into a bounce, especially against that style of fighter, and not take those kicks. Not play with those kicks. It’s just a motherf–ker to take. That’s my mind going,” McGregor said. 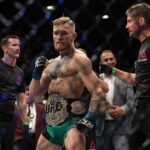 Conor McGregor’s long-term coach John Kavanagh was in conversation with Ariel Helwani a day after the Irishman’s stunning UFC 257 defeat. During the discussion, Kavanagh reflected on a host of topics surrounding the first UFC pay-per-view of 2021 and even went on to reveal what’s next in store for McGregor.

With Dustin Poirier’s win at UFC 257, the score is tied at 1-1 between him and The Notorious One. And, Coach Kavanagh has suggested that Conor McGregor is already going around “harassing” people to get a third fight with The Diamond.

Conor McGregor’s loss to Dustin Poirier was the first TKO loss of his career. Initially, the former UFC lightweight champion had an excellent start to the fight and had a solid first round. But, kudos to Poirier for turning the bout around in round two and eventually sealing the victory by damaging McGregor’s calf.

With Dustin’s leg kicks doing the damage, the former interim lightweight champ unloaded a barrage of strikes on McGregor, forcing ref Herb Dean to call the fight. John Kavanagh has now revealed that Conor McGregor is aiming to return before the summer and his main goal is to cross paths with Poirier for the third time.

For the trilogy fight, Conor McGregor has seemingly proposed the idea of a UFC lightweight title fight.

“He’s already harrasing everybody to get th rematch. We would love the rematch, I don’t think Dustin is against that. If we could ger the rematch before the summer, that’d be amazing. If it’s not to be, I guess I don’t really know. Maybe he drifts off into the boxing.”

Thanks for the support everyone! Was not my night/morning in there but a great contest to improve on. I’m excited at the blockbuster trilogy I now have on my hands. Dustin is a hell of a competitor and I look forward to going again. God bless us all, happy Sunday ❤️

Conor McGregor has made it clear that he wants to stay active in the UFC for the rest of 2021. The Notorious One has promised that he will return to the octagon once again this year, but it remains to be seen if he will stay true to his word or not.

A third fight against Dustin Poirier is rumored at the moment. However, a trilogy against Nate Diaz could also be considered for The Notorious One next.