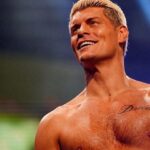 Cody Rhodes recently interacted with his fans through a Q&A on Twitter, in which he answered a variety of questions. When a Twitter user asked him what his favorite match he has been in is, Cody had a pretty surprising pick.

Though he confessed his choice varies depending upon when one asks, he still gave a response that has gotten the fans buzzing. Apart from listing out his favorite match, Cody Rhodes also mentioned many other bouts of which he’s proud.

That changes a lot, but today…

Probably ALL IN – never heard a building that loud, and to me…noise is the job.

I liked the original Darby match as well, also Kenny from Supercard, Legacy V DX, big spot in my heart for the Shaq encounter. My true favorite has yet to happen. https://t.co/G4RIQAESxK

The match at All In (2018) was arguably one of the most underrated bouts in recent memory. Wrestling against Nick Aldis for the historic NWA Worlds Heavyweight Championship, Cody Rhodes put on a wrestling clinic with his show-stealing performance.

In the end, The American Nightmare toppled Aldis and won the championship. With his win, Cody and Dusty Rhodes became the first father-son duo to win the prestigious title.

Among other picks, Cody Rhodes also said the recent bout in which he teamed up with Red Velvet to take on Shaq and Jade Cargill has a big place in his heart.

It’s understandable why Cody Rhodes would choose this, as it was the first time AEW put a huge celebrity in the ring for a match. The clash not only featured an impressive performance from O’ Neal, but it created legitimate future stars in Cargill and Velvet.

Cody Rhodes currently has a lot on his plate. While he and his wife Brandi Rhodes have a baby on the way, other things have kept him occupied. His upcoming clash with fellow Nightmare Family member QT Marshall on this week’s AEW Dynamite could potentially be the match of the night.

Apart from this, Cody is also busy shooting for the upcoming reality TV series Rhodes To The Top.

Are you excited about Cody’s match with QT Marshall? Let us know by sounding off in the comments section below. 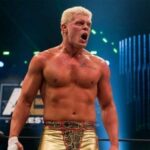 AEW Dynamite kicked off in October of 2019. Their first show was live in Washington DC in front of a sold-out arena of excited and energetic fans.

A lot has changed for the company in the course of a little over a year, and Executive Vice President Cody Rhodes is no stranger to that reality. He also knows that the company isn’t perfect and that there is room for them to improve going forward.

Rhodes was the guest on the latest edition of AEW wrestler Chris Jericho’s top-rated podcast, Talk is Jericho. When Jericho asked Rhodes where AEW could improve things in the future, The American Nightmare had a lot to say on the subject.

“One of our biggest pros is also our biggest con, no pun intended. It’s that we have such freedom. So, such freedom sometimes means that things are too similar on the same show. Well, this guy’s asking me to join team FTW, and this group they’re asking if he’ll join… That’s one of those areas where that freedom is fun and pro, and it’s like they’re not worried about the traditional rules, it’s punk rock, but also you have to be disciplined so that it doesn’t desensitize the show. To me, a show has to work not unlike a promo works. There has to be this beginning, there has to be this climb in the middle, and then there’s some heat, and then there’s some big finish. It has to be like a flow. To me, eight times out of ten, we’ve got the flow right. But on night’s where we haven’t, it’s because our own freedom has been our biggest enemy, but I’d rather that than a sanitized C+ show.”

Cody grades the first year of AEW as an “A”

Jericho also asked Rhodes to reflect upon his first year-plus with the company. He also wanted to know if being a wrestler and a member of management in AEW was more difficult than he thought it would be. Rhodes responded:

“Somebody asked me to grade it. Of course, as part of the company, you’re not going to give it a bad grade, but I said “A, and there’s room for an A+.” We know where we need to grow. This has been, AEW’s first year, if it had been it’s last year, thank gosh it wasn’t, it’s still been the greatest year of my life. Learned a lot of lessons. Learned some hard lessons about the burdens of management. If you were popular before you’re definitely not going to be popular as you enter that space.”

How do you think the first year of AEW went? What changes would you like to see the company implement this year going forward? Let us know by sounding off in the comments section below.