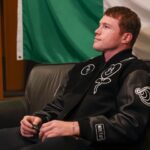 In the week before their fight at Hard Rock Stadium in Miami, Canelo Alvarez and Avni Yildirim visited the venue for the first time for a photo shoot to promote the event. As is customary when fights occur in locations belonging to professional sports teams, each fighter was given a commemorative jersey with their name on it.

Canelo’s jersey bore the number 1, likely to signify that he is boxing’s No. 1 pound for pound fighter and the sport’s top draw.

Yildirim’s had No. 58, which one could debate is roughly where he should be ranked among the sport’s top super middleweights (BoxRec’s algorithm has him at 45, for argument’s sake). It’s also a number quite close to the odds levied against him in the bout (50-1).

Ultimately, 58 was the exact number of power punches Canelo landed in the fight before promoter Ahmet Oner and trainer Joel Diaz pulled the plug and stopped the lopsided beatdown after the third round.

Yildirim was predictably no match for Canelo whatsoever, absorbing 67 punches overall while landing just 11 of his own, none of which were of consequence.

In 2018, Canelo used Yildirim as a sparring partner in preparation for his rematch with Gennady Golovkin. He hasn’t used him since. There are likely many reasons why—availability, the desire for variety in his training partners, or Canelo just carefully selecting partners who more closely mirror his upcoming opponent. But one reason could be that, as evidenced in the ring on Saturday night, even in sparring, there isn’t much Yildirim can offer that would make Canelo sweat, let alone think.

To be fair to Yildirim, the same could be said for almost every fighter in the world in Canelo’s weight neighborhood. However, Canelo’s complete lack of respect for Yildirim’s abilities were evident when in round one, he attempted an absurd fake jab turned into an uppercut, and actually landed it. It’s a move Canelo often pulls out late in fights when he’s been dominating for a while as he did against Callum Smith. On this night the cruise control was on from the moment the bell rang, just as it was in the Miami Vice-style hype package that aired before the bout featuring Canelo in shades driving around Coconut Grove.

The video, and the fight that followed it, were simply high-priced commercials for Canelo’s next fight against Billy Joe Saunders in May.

Yildirim’s utility in this bout was simply to be a body to keep Canelo busy, but more importantly, to fulfill Canelo’s mandatory defense in order to retain the WBC super middleweight title.

Here is the best explanation for how and why Yildirim became the WBC’s mandatory despite losing his last fight: Yildirim’s loss to Anthony Dirrell in 2019 was declared “controversial” enough after an appeal that the WBC made him the mandatory next opponent for the winner of the upcoming bout between Dirrell and David Benavidez. Benavidez defeated Dirrell to win the title. Yildirim was supposed to face Benavidez, but then (a) tested positive for two performance enhancing drugs (for which he was later excused and fined by the WBC), and (b) got injured in training camp for a scheduled fight with Benavidez. Benavidez lost the title on the scales prior to his fight with Roamer Angulo, rendering it vacant. Canelo then won that vacant title in his bout with Callum Smith. All the while, Yildirim remained the mandatory, and then cashed in monetarily in the biggest way he could have imagined.

Canelo will receive criticism for his choice of opponent on this night, but the blame should be placed on sanctioning bodies and the structure that fighters are placed in. As it presently stands, there are four major titles in each weight class, and the highest honor is collecting all of them at the same time to be able to call oneself the undisputed champion.

For a fighter as decorated, powerful and wealthy as Canelo, you might ask why he bothers with these organizations at all. And therein lies the answer. Canelo has reached a level of success professionally and financially where he has to invent goals for himself in order to keep himself motivated. In this case, it’s the pursuit of all four trinkets at 168 pounds. On this night, that quest led him through a totally hapless opponent, but the next two times we see him would lead him to Billy Joe Saunders and Caleb Plant.

Canelo has already beaten the game, and now he’s going back to try to improve his high score.

The larger goal for Canelo is to one day be remembered as the greatest Mexican fighter who has ever lived. In the eyes of many diligent historians, it’s a goal that might not be attainable unless Canelo fights for much longer, and/or tops out at a weight much heavier than we expect him to. The resumes of names like Julio Cesar Chavez, Ruben Olivares, Salvador Sanchez, Baby Arizmendi and more were built in eras with other bona fide legends to battle, and in an era when fighters could fight more often.

But even the above names are difficult to compare to one another. Intelligent people have ranked all of them at the top of their lists with sound justification. When Canelo ultimately retires and years have passed since his era, we will be able to better contextualize his accomplishments within the setting of his time. We already know that Canelo is a generational talent.

In one respect though, Canelo has already surpassed every Mexican fighter ever. Never before has a Mexican fighter been the biggest star in the sport overall. Even at Chavez’s peak, there were always Leonards and Tysons to overshadow him commercially.

In that regard, and in 2021, Canelo stands alone. No. 1, no matter who is printing the jersey. 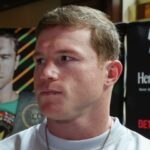 WBC, WBA super middleweight champion Saul “Canelo” Alvarez is paying no attention to the critics who believe that he needs to face some of the top talents at the light heavyweight limit of 175-pounds – like WBC, IBF champion Artur Beterbiev.

Canelo is back in the ring on Saturday night, when he faces mandatory challenger Avni Yildirim at the Hard Rock Stadium in Miami, Florida.

The Mexican superstar has already booked his next fight on May 8th, likely against WBO champion Billy Joe Saunders.

Canelo is a tremendous favorite to beat Yildirim, but he’s taking no chances with his upcoming opponent.

The two boxers had previously sparred in the past.

“In sparring it’s totally different, it’s totally something else, but he’s a strong, hardened fighter who goes head-to-head. He punches, holds on a lot and doesn’t step back. You always have to be careful with those kind of fighters, because with one punch they can change the fight. I’m prepared so there won’t be any surprises,” Canelo told George Ebro.

Canelo does not see anyone out there who can overcome his talents in the super middleweight division.

“I don’t think so. I feel at my best at this stage of my career, I feel very strong, more skilful, more confident inside the ring. I don’t think there’s anyone who can beat me in the division,” Canelo said.

Despite making a move to 175 in 2019, to capture the WBO title with a knockout of Sergey Kovalev, Canelo has no intention of returning to that weight class in the near future.

After that win, Canelo vacated the title and dropped down in weight. 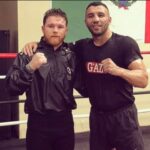 Avni Yildirim enters as a considerable underdog ahead of his upcoming challenge versus pound-for-pound king Saul ‘Canelo’ Alvarez.

That hasn’t prevented an entire nation from standing tall with its favorite son. As much has been acknowledged by the super middleweight contender, who vows that the Feb. 27 unified 168-pound title fight will end with his serving as the lone active champion out of Turkey.

“It will be my chance to win the most important fight as the son of this country,” Yildirim insisted during a press conference Thursday afternoon at CVK Park Bosphorus Hotel in Istanbul. “I hope that we move forward with the prayers of the Turkish people.”

Istanbul’s Yildirim (21-2, 12KOs) has not fought since a technical decision loss to Anthony Dirrell in the Feb. 2019 vacant WBC super middleweight title fight. The manner in which the fight ended—Dirrell suffering a horrific cut from a clash of heads and the fight being stopped two rounds later—was enough for the WBC to consider a formal appeal from Yildirim and career-long promoter Ahmet Öner to allow him to remain in contention for a second title shot.

Dirrell has since lost to David Benavidez, who in turn lost the title at the scale after missing weight ahead of his 10th round knockout of Alexis Angulo last August.

Yildirim remained the number-one contender, was believed to have hit the jackpot when Alvarez (54-1-2, 36KOs) enforced his WBC “Franchise” champion status to challenge for the vacant title. He still has, though it would require having to wait two more months. Alvarez instead faced England’s Callum Smith, scoring a lopsided points win to collect the WBC and WBA belts which will be at stake in his Feb. 27 mandatory title defense versus Yildirim.

The two-year wait wasn’t ideal, although it gave Yildirim time to recover from separate injuries which left him unable to compete for all of 2020.

“Since my last fight, I had some minor injuries, the pandemic affected me, but we were patient and we continued working,” notes Yildirim. “I continued my training in the United States and Germany for 21 months outside my country. I did not give up.”

Nor has a nation ceased believing in him, no matter the odds.

“Avni and professional boxing in Turkey is at a very high level that no boxer in the country has reached so far,” Eyup Gözgec, president of the Turkish Boxing Federation stated. “Whatever the outcome of this fight is an inspiration to all young athletes. I want to thank Ahmed Oner for everything he has achieved for boxing in Turkey.

“I wish Avni Y?ld?r?m success. A true champion. I believe with all my heart that Avni will win this important fight.”

Yildirim and his team are prepared to live up to those lofty expectations.
“Avni will definitely bring this green and gold belt home,” vowed Öner. “On February [27th] he will show his quality to the whole world. All the work that has been done will pay off. This will be a great fight and a great event for Turkey. Win or lose I am sure Yildirim will leave his soul in the ring for his country.”

It remains to be seen whether Yildirim can upset the odds, with few if any picking against Alvarez—a four-division champ and the consensus pick as the best fighter in the world today. It’s a moment for which he’s waited two years in order to disprove his critics.

“It is said that the end of the patience is salvation, patience is a good sign,” notes Yildirim. “We have done everything to win this important fight. I trust my coach Joel Diaz, who has helped me to improve significantly.

“It is a great honor to represent my country on such a big stage. We will do our very best to bring the WBC green and gold belt to our country.”