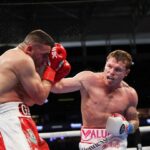 Smith, unbeaten at the time, was viewed as one of the best fighters in the division and Canelo handled him easily.

And back in 2016, Canelo knocked out Smith’s older brother, Liam Smith, to capture the WBO title at junior middleweight.

Smith is not convinced Saunders, despite his tricky southpaw style, possesses enough power to keep Canelo at bay.

He expects Canelo to eventually walk Saunders down and connect with big punches.

“Billy Joe has got movement, he’s a southpaw, a bit awkward and can probably stay out of trouble. But I don’t know if he’s got anything to keep Canelo off – enough power. Canelo is hard to hit clean and I don’t know if Billy Joe has enough to get his respect, and put a dent in him.

“I see Canelo finding a way. Walking him down, starting to land as the fight goes on. I will always back a Brit but I don’t think anyone beats Canelo. He is very clever in terms of the jab. He walks you down. With anybody else, you would jab. But he wants you to jab because he’s a counter-puncher. So you don’t throw as many jabs and while you are waiting, he closes the space down without throwing anything.

“Then he jabs and hits you. You think: ‘How did that land?’. He keeps you guessing all the time. You are hesitant. His best asset was his presence and his defense. He was so hard to hit clean. When I was throwing he was riding them, making me miss. You aren’t landing so you stop fully committing to shots. He takes away what you are good at.”