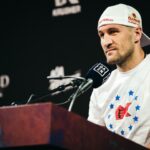 Bernard Hopkins was waiting for the next name to be mentioned after the team for Bektemir Melikuziev came to him with the first one on the list.

The ambitious handlers behind the unbeaten Melikuziev insisted on former three-time light heavyweight titlist Sergey Kovalev as the opponent of choice for his 7th pro fight. It was right in line with the plan in place for the 2016 Olympic Silver medalist from Uzbekistan from the moment he turned pro less than two years ago.

At least, that was the plan for Melikuziev’s immediate team. His promoter had a slightly different perspective.

“I’d rather see Sergey limping a little bit, maybe with a cane and needs somebody to open the door for him. I’m telling you, I’ve been in there with the guy,” Bernard Hopkins, Golden Boy Promotions partner admits to BoxingScene.com.

Hopkins was two months shy of his 50th birthday but still a unified light heavyweight titlist at the time of his showdown with Russia’s Kovalev in Nov. 2014. Things didn’t at all go well for the Hall of Fame-elected two-division titlist, who was dropped in the opening round en route to a 12-round shutout loss against a prime Kovalev (34-4-1, 29KOs).

A more faded but still dangerous version of the former light heavyweight king was scheduled to face Melikuziev (6-0, 5KOs) on Jan. 30th at Fantasy Springs Casino in Indio, California.

For Kovalev, it would have been his first fight since an 11th round knockout at the hands of Saul ‘Canelo’ Alvarez in Nov. 2019.

Unfortunately for Melikuziev, the contest is likely off.

On Thursday, it was first reported by BoxingScene.com that Kovalev had tested positive for synthetic testosterone.

It remains to be seen if the contest will be rescheduled or if Kovalev will be suspended by the California State Athletic Commission.

The dangerous fight was a calculated risk from the viewpoint of Melikuziev’s team, which includes respected boxing manager Vadim Kornilov and head trainer Joel Diaz.

They were more than confident in his ability to knock the former champion out.

Hopkins, on the other hand, viewed the bout as being dangerous enough to go either way.

“They have a lot of high hopes about Bek,” notes Hopkins. “His team, they’ve been watching Sergey Kovalev. They believe the pickings is ripe. Sometimes, the management team think one way and the promoter thinks different. To me, Sergey is always dangerous until he’s on his back. You don’t know run around with a name Krusher and just get crushed. Yes, he got crushed by Canelo…but that’s Canelo! 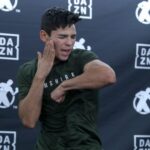 The brass at Golden Boy Promotions is in full agreement that the upcoming fight with Luke Campbell was a necessary next step in the rising career of Ryan Garcia.

While all remain confident in banking on the rising 22-year old to prevail, Garcia’s vow to walk through the veteran lightweight contender far exceeds the expectations surrounding this weekend’s DAZN headliner.

“I try to explain it to people, whether they get it or don’t. Both fighters come in with credibility,” Bernard Hopkins, the Hall-of-Fame-elected former two-division champ and current Golden Boy partner told BoxingScene.com. “If Ryan don’t go in there with his A-game it’s going to be a long night.

“If Ryan does go in there with his millions of followers on Instagram and think Campbell’s just gonna come in, do a dance with them and leave, it’s not gonna happen.”

The bout will air live on DAZN in front of a socially distanced crowd at American Airlines Center in Dallas. The televised undercard begins at 3:00 p.m. ET, with the main card due to go live at 5:00 p.m. ET.

Garcia (20-0, 17KOs) has assured his legions of admirers—and his growing list of industry skeptics—that 2021 will prove to be the year where takes over the red-hot lightweight division. The journey begins with his interim title fight versus Campbell (20-3, 16KOs), a 2012 Olympic Gold medalist for Great Britain and former two-time title challenger whom is deemed as García’s toughest test to date.

Admirable of the fight’s manifestation is the fact that García called for Campbell by name when presented with more than one path on the road to his first career title fight. With that came a homework assignment for the Golden Boy team—exploit any holes in Campbell’s game that can be viewed as advantageous to the Victorville, California-bred lightweight, along with everything which can be viewed as a threat.

That could turn out to be a very good thing, especially considering García’s quest for superstardom.

“If Ryan rolls over Campbell and makes it look easy to the point where others had a tough time with him—it’s not a wrap, but it’s a wrap that night,” insists Hopkins. “It’s then the conversation of who he fights next.  But you must respect Campbell [in the ring] and give him the chance to fail.

“That’s what I’m telling Ryan with this—you have to give him the chance to fail. Let him know from the first quarter of the fight, the first three rounds—four if you want to add that in there—that’s going to dictate the pace. That’s going to dictate whether he’s there to get his lunch and leave, or if he’s there to win. I believe both guys are there to win and they will look to (make that statement) early.”