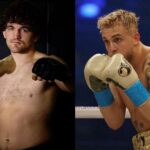 The internet went crazy with Jake Paul’s announcement that he will be fighting former UFC welterweight Ben Askren in a boxing match on April 17.

Reactions to the fight started to pop up everywhere, with combat sports fans making their predictions. While one side is sure that Jake Paul will prove that he should be taken seriously, the other half scoffs at the idea that the YouTuber could beat a professional fighter.

Here are some of the best reactions to Jake Paul versus Ben Askren on Twitter:

Ben Askren has agreed to fight Jake Paul in boxing this March. If Ben lands one of his patented sleeper combos that kid will be dribbling pea soup down his face for the rest of his life. No boxing commission should allow this to happen. God help us all… pic.twitter.com/99veLUsl7C

At the same time that Askren believes that this is the easiest money he will get in his life for a fight, Jake Paul initiated his trash-talking. The YouTuber mocked the former ONE and Bellator welterweight champion for the knockout he suffered against Jorge Masvidal.

“I know Jake Paul is enjoying pretending he is a fighter,” Askren said. “I think on April 17, he is going to have a rude awakening to what being a fighter is really like. Jake has led a privileged life and doesn’t really know what the meaning of being a fighter is. I’m going to put his dreams to an end.”

“I started boxing two years ago, and I’m still going to knock his ass out faster than Masvidal… The world complained because I knocked out a basketball player and not a real fighter,” recalled Jake Paul about his win over Nate Robinson. “So now I’m giving the people what they want by taking on a ‘real fighter.’ After Ben Askren is added to my knockout meme collection, what can anybody say?”

The venue and location for the boxing match are yet to be announced. The contract’s value is still undisclosed, but Askren said that “is more money than he ever got for any other fight.”

After the violent knockout against Robinson, Jake Paul started to make call-outs to MMA fighters such as Dillon Danis, Michael Bisping, Conor McGregor, and Ben Askren.

Jake Paul entered into a nasty feud with Danis, but despite the efforts put into it by Jake Paul for a fight to happen with the Bellator welterweight, Danis never accepted the offer.

However, Askren seems to think that Jake Paul is a farce. The former UFC fighter believes that he can defeat the YouTuber without much effort. Do you think the same? Sound off in the comments.