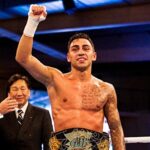 Ring City USA today announced two compelling undercard matchups that will round out the main card for its Thursday, April 22 event from the U.S. Military Academy at West Point, N.Y. and live on NBC Sports Network (9 p.m. ET/6 p.m. PT).

Upset-minded Cruz Hernandez, 30, will be challenging for her first world title. The southpaw is currently riding an 11-bout winning streak including victories over world ranked contenders Vissia Trovato and Jocelyn Morales Torres.

Making his United States debut, heavy-handed Juan Pablo Romero arrives for battle following a ten-round unanimous decision over Sergio Torres on November 28, 2020 in Mexico City, Mexico. Prior to his most recent outing, Romero, 31, has faced top competition for a rising prospect and performed well by knocking out four consecutive opponents within the first four rounds.

The 24-year-old Jonathan Navarro has become one of the most highly touted prospects in the United States since turning professional five years ago. The nephew of former perennial contenders Jose and Carlos Navarro, Jonathan is trained by the renowned Robert Garcia. Coming off a 17-month layoff, he hits the ring following a tremendous second round knockout of Lebin Morales on October 24, 2019 in Indio, CA. Among the victories on his ledger include a seventh-round knockout over then-unbeaten contender Damon Allen in August 2018.

Universum Box-Promotion and Salita Promotions will co-host the inaugural event of their ambitious new partnership by presenting a mammoth 14-fight night of boxing at the Universum Gym in Hamburg, Germany, and streamed live on BILD +.

And to open the broadcast, undefeated Cuban lightweight Frank Zaldivar will face an opponent that is TBA in a six-rounder.

“We are very happy to be able to present a very international fight card worldwide on April 24,” said Ismail Özen-Otto, CEO of Universum. “In the main fight we have two elite athletes, Artem Harutyunyan the Olympic bronze winner of the Olympic Games in Rio 2016 against WBA #9 contender Oliver Flores from Nicaragua. The winner of this fight could soon be a world championship challenger.”

“I am excited about working with Universum CEO Ismail Özen- Otto and matchmaker Flavio Oleaga Mirabal and all their world-class fighters,” added Dmitriy Salita, President of Salita Promotions. “On April 24, boxing fans will get a chance to see some of the best international talent on the planet in competitive, match-ups.”

Oleaga Mirabal, who put the card together, says he’s happy about the exposure the Universum fighters will receive from the partnership with Salita. “The fight card is very exciting. We will stream it in Germany with our media partner Bild + and thanks to our US partner Salita Promotions, we will also broadcast it internationally with other media partners,” he said. “This is a great start to our collaboration.”

A further seven fights will be held on the untelevised portion of the undercard, featuring several of Germany’s next wave of boxing talent in career-building challenges.

This past Saturday night, popular heavyweight Joey Dawejko knocked out Joe Jones in the opening round of their scheduled eight-round heavyweight bout at the 2300 Arena in Philadelphia.

The bout headlined a card promoted by RDR Promotions.

Dawejko was dominant in dropping Jones twice, with the final punch coming from a big left hook, and the fight was halted at 2:50.

In the co-feature, surging lightweight Nahir Albright notched his third consecutive stoppage victory by stopping Dante Cox in round three of their scheduled six-round bout.

Albright dropped Cox twice in round two, and finished him off at 2:13 of the third frame.

Albright of Sicklerville, NJ is now 11-1 with five knockouts. Cox of Glen Burnie, MD is 6-2.

Smith put Hilton down for a flash knockdown in round three from a left. That was sandwiched around Hilton outboxing Smith, and Hilton took all three cards by 58-55 scores.

Brown dominated with body shots, and the fight was stopped at 1:50 of round three. A West Philadelphia native, Brown is 7-0 with four knockouts. Nelson is 3-18.

Jahdon Ervin made a successful pro debut by taking a four-round unanimous decision over Kareem Gladney in a middleweight fight.