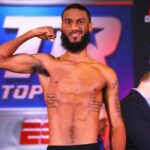 Albert Bell is ready to step up for what would be the biggest fight of his career to date.

The unbeaten junior lightweight contender has raised his hand to next face Gabriel Flores Jr., who is suddenly in need of an opponent on a Top-Rank promoted Feb. 20 ESPN show in Las Vegas. Flores was due to face former 130-pound titlist Andrew Cancio, who was recently forced to withdraw due to a back injury.

“I was just informed Andrew Cancio will no longer be fighting February 20th; I got an offer from Team Flores that I accepted,” Bell claimed. “I was just wondering, are you ready to stand on them words you and your team have been commenting [online] for the past two years?”

Two sources with knowledge of ongoing talks have informed BoxingScene.com that Bell is on the list of candidates currently under consideration.

Bell (17-0, 5KOs) has not fought since a 10-round shutout of Philippines’ Mark Bernaldez last July at MGM Grand Conference Center in Las Vegas. The bout aired live on ESPN, an opportunity accepted by the now 27-year old Toledo, Ohio product despite having to fight through a pre-existing injury to his right hand.

The effort put forth by Bell was enough to preserve his unbeaten record along with providing one enthusiastic bettor with an $157,500 payout from a $150,000-placed bet. The fight came two weeks after Flores (18-0, 6KOs) emerged in a 10-round win over Josec Ruiz in a makeshift main event at the same venue last June. Flores’ win saw one bettor collect a $192,021.30 payout from a $187,847.35 placed on the 20-year old from Stockton, California who now lives and trains in Vegas.

Bell is now prepared to bet on himself—figuratively—in an offered showdown of unbeaten 130-pound prospects, so long as his desired target is prepared to sign on the dotted line. The two have circled one another—largely through social media—for the past few years, with Bell mostly sitting back in observation mode. In light of recent events, the time has come to act.

“I’ve been peacefully minding my business as usual but ever since 2019 I’ve been hearing rumors that you guys [have] been going around asking multiple people that know me, about me,” notes Bell. “Well, here I am. You can see for yourself firsthand.

“So are y’all going to back up the whispers or are y’all trying to run from it like everybody else be doing?”