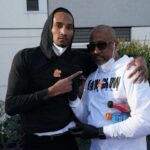 Alantez Fox returned to the win column for the first time in more than a year and at a new weight.

Hernandez applied pressure in the opening round, a necessary strategy in giving away five inches in height to Fox, a 6’5” fringe contender from Upper Marlboro, Mayland who also boasted a seven-inch reach advantage. Fox put those physical dimensions to good use when able to control the action with his jab which he landed on several occasions in round one.

Action took place far more often at close quarters in round two, the product of Hernandez avoiding Fox’s jabs and punching his way inside. The Fresno-bred super middleweight effectively worked the body of Fox, who was warned in between rounds for allowing his trunks and protective guard to ride too high.

Both boxers had their say in rounds three and four, with Hernandez moving forward and looking to bully Fox who fought effectively behind his jab. Fox was able to establish distance by the end of round four, though was also forced to contend with a cut in his left eye which was produced by an accidental clash of heads.

Fox was able to land with right hands in round five, though warned by his father and trainer Troy Fox to not waste any punches. The advice was heeded in round six, as Hernandez struggled to contend with the mobility and range of his taller foe. Fox repeatedly poked with his jab, occasionally following with sharp right hands.

The momentum remained with Fox throughout the balance of the fight as Hernandez’s early effective pressure was reduced to plodding in the later rounds. Fox fought almost exclusively on the outside down the stretch, popping Hernandez with a crisp right hand at the start of the ninth round. Whenever Hernandez was able to work his way inside, Fox landed the more effective shots.

Hernandez did his best to follow the marching orders of renowned cornerman Henry Ramirez, who urged his charge to force a physical fight in the 10th and final round. Hernandez forced an inside fight in the final three minutes, doing his best to remain in Fox’s face. Fox jabbed his way out of trouble, disallowing Hernandez to enjoy any sustained success in preserving the hard-fought win.

Fox improves to 27-2-1 (12KOs) with the win, his first in well more than a year. A knockout loss to Liam Williams last December in England prompted a move up to super middleweight, with his first fight at the new weight result in a No-Contest when a clash of heads ended his non-televised fight with Habib Ahmed after three rounds this past August.

Hernandez falls to 14-4-1 (3KOs) with the loss, the third in his last four starts. The bout ended a whirlwind tour, with Hernandez initially due to face James Kirkland in the evening’s main event, only to be pulled from the show and placed on standby for another card earlier this month. That opportunity never panned out, only to be added to this show on short notice.